Akaza (, Akaza?) is a major supporting antagonist of Demon Slayer: Kimetsu no Yaiba. He is a Demon affiliated with the Twelve Kizuki's Upper Ranks, holding the position of Upper Rank Three (の, Jōgen no San?).[2]

Over a century ago, when Akaza was a teenager, he was a human by the name of Hakuji (, Hakuji?), a criminal pickpocket who stole money to buy medicine for his sick father. After his father's death, Akaza was accepted as a student of Keizo's dojo and the one who looked after his sick daughter, Koyuki. When he turned 18, he was forced to submit to Muzan Kibutsuji and became a Demon after losing his memories.

Akaza is also responsible for the death of the former Flame Hashira, Kyojuro Rengoku.

As a Demon, Akaza took the form of a muscular young man with skin so fair that appears bright green-tinged white, decorated by a pattern of thick blue lines, which resemble the criminal tattoos he had as a human. The lines on his face curved through each of his eyes from below his ears to over his temples, another blue line running from the center of his hairline to the bridge of his nose, with two more lines running around his neck, three others branching off the lower one to his torso.

The center line ran directly down his chest to halfway down his stomach, and the other two branched off to the sides over each side of his chest to join the two other lines, this same three-line pattern there also repeating around his waist.

On his arms there were lines running down the front of his shoulders that ran into to two more, which went around his biceps, before continuing to run down to his wrists, below which it could be seen that each of his fingers is also dark blue with an orange fingernail, his toes also sharing this unusual appearance.

Akaza had short, bright pink hair that fluffed out around his head, and inward-tilting yellow eyes with pink eyelashes and blue sclera that looked somewhat like cracked glass, the kanji for "Upper Rank Three" etched into their irises.

He wore little, only sporting a short, sleeveless dark purple-pink haori that was cut off at his waist, left open to expose his chest, that was decorated by a square pattern on his back. Below this, he sported a pair of baggy white pants that he rolled to just below the knee with a blue rope belt to secure them at his waist. Akaza prefers to go barefoot, but wears a chain of large round pearls around each of his ankles.

During his human days as Hakuji, he had the same hair, just colored black rather than pink, and pale blue eyes with unusually-colored pink eyelashes. He was also very muscular as a human, and, on each of his forearms, he bore three black criminal tattoos.

He wore a dark blue-gray yukata. 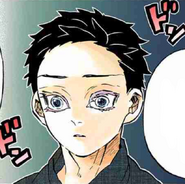 Akaza as a human.

Akaza is a strong, stubborn and impulsive Demon who enjoyed fighting, especially strong Demon Slayers. He looked down on anybody he deemed weak, but genuinely respected those who were strong in his eyes, regardless of their race. Once he met someone he deems strong, he demanded to know their name, and would not stop until he finds out; he remembers all the names he's committed to memory as tribute to their strength.[3]

Akaza had a deeply-rooted psychological need to become stronger, and did not get along with his fellow Upper Ranks due to him seeing them as his rivals.[4] He is especially antagonistic towards and even appeared jealous of the two Upper Rank above him, Doma and Kokushibo, lashing out at Doma[4][5] and vowing to kill Kokushibo.[6] Even after being beaten down and beheaded during his fight against Tanjiro Kamado and Giyu Tomioka, he stubbornly held on and continued to fight despite not even knowing why he wanted more power.[7]

As a human, Hakuji possessed the same stubborn personality with a big heart and resilience.[8] He valued others more than his own well-being, and hated himself for having a life "full of empty words and promises." Even after becoming a Demon and losing his memories of his human life, parts of Hakuji's memories influenced Akaza's decisions; he refuses to eat women, despite knowing it would make him stronger if he did so.[9] His hatred of weak, cowardly people stemmed from a corruption of his human memories, where a rivaling dojo poisoned his dojo's well because they were never able to beat him.[10]

Later after remembering the entirety of his past and all of his regrets as a human and demon, Akaza was shown to have openly begun hating himself and all of his shortcomings during his life where he wasn't there to save or protect everyone that he loved and cared for and later admitted that the person he really wanted to kill all along was himself.

Overall Abilities: As the holder of the 'Upper Rank 3' title, Akaza possessed a tremendous amount of power, having been able to defeat Kyojuro Rengoku, the Flame Hashira,[11] and also several past Hashira,[12] according to what he stated. Later, he is able to fight and overwhelm both Tanjiro and Giyu, even when they were both Hashira-level swordsman were using their Demon Slayer Marks and Tanjiro had access the "Transparent World". If not for Akaza losing his will to continue fighting, he would have certainly killed both of them. In a further testament to his might, he is capable of becoming the holder of the Upper Rank 3 title and the fourth-strongest Demon in the series without killing or eating any women,[13] which would've hindered his growth as a Demon drastically.

Akaza has a unique ability called Technique Development (, Jutsushiki Tenkai?).[26] Akaza starts by initiating a stance unique to the Soryū Style. Currently, there are 2 versions of the stance. The first stance is performed by bending his knees in a half-crouch position, extending his right arm with a half-clenched fist facing his body and bending his left arm with an open palm; The second version nearly identical except he opens his palm on his right arm while fully clenching his fists in a downwards bend on his left arm.

Retrieved from "https://kimetsu-no-yaiba.fandom.com/wiki/Akaza?oldid=79830"
Community content is available under CC-BY-SA unless otherwise noted.