View source
watch 01:40
Boba Fett Returns - The Loop
Do you like this video?
Play Sound

As Tanjiro is about to disembark on his first mission as a Demon Slayer, a narration conveys important information regarding the supplies Tanjiro receives.

It is revealed that the uniforms worn by demon slayers are lightweight, water resistant, flame retardant, and extremely durable to the point where the 'claws and fangs of lesser demons' would not be able to damage it. Urokodaki gives Tanjiro a custom made box he had hand crafted in order to ease his travels of carrying Nezuko during the day.

The chapter resumes with Tanjiro entering the village where a string of odd disappearances had been occuring. He encounters a boy named Kazumi who leads Tanjiro to the location where his beloved, a girl named Satoko, was last seen before she had disappeared.

Just as Tanjiro is about to investigate the area, the scene pans out to a sleeping girl being dragged into the ground by a supernatural demon. Sensing the commotion, Tanjiro sprints towards the scent of the newly appeared demon and uses his sense of smell to accurately locate and retrieve the girl from the bog. He pulls her out and carries her proceeds to carry her to safety. 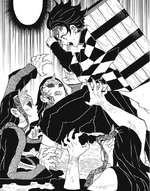 The agitated demon disappears into the ground and reappears right beneath Tanjiro's feet in 3 different forms. The chapter ends with Tanjiro beginning his counter attack against the demon.

Characters in Order of Appearance