Doma (, Dōma?) is a major supporting antagonist of Demon Slayer: Kimetsu no Yaiba. He is a Demon affiliated with the Twelve Kizuki, holding the position of Upper Rank Two (の, Jōgen no Ni?).[2]

As a Demon, Doma took the form of a young man with a moderately toned and muscular body, who is of a notably pale complexion and possessed unusually long, pointed nails that appeared to be stained a pale blue. His hair could appear either silver or a pale golden blond, and he wore it parted to his left, the shorter parts around his face seeming to flare out to either side around his head, curving backwards with one strand left down his face to fall between his eyes, while the longer parts were left to drape centrally down his back in a thinning spiral. His eyes have been described to be incredibly rare and beautiful,[3] as, in color, they appeared to be made up of an array of rainbow pastel tones that fade into one another as they circle his irises, this unusual appearance even causing people to believe Doma is a blessed being who could communicate with the gods. The kanji for 'Upper Rank Two' (or 'Upper Rank Six,' at the time when he first met Gyutaro and Daki)[4] is etched across them, and they were shaped to slope downwards towards the sides of his face, with a set of notably large, thick black eyebrows acting to frame them above.

Doma wore a blood-red turtleneck of a design that made it appear that the section between his neck and upper chest is covered by a black substance that looks like it's dripping slightly down his body, this same design repeated at his wrists and down his hands, as well as on the small, circular "blood stain"[5] he adorned on his head. Below this, he wore a pair of straight, tan-colored pants of a pinstriped design, their cuffs visibly loose, which he secured with a pale green-tinged golden belt, its buckle a bright silver. On occasion, Doma may also have be seen sporting a black cloak, which he drapes around his shoulders, two lengths of purple and black cloth with a rectangular pattern also hanging from it around his neck, as well as a black, crown-like hat which is lined with gold around its frontal plates and has flowing black ribbons dangling from each of its sides. He is also usually seen holding a pair of sharp fans that were made entirely out of shining gold, a lotus design engraved across them and a hoop of jade-colored strings hanging from their bases, which acted as his primary weapons. 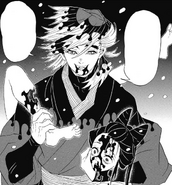 Doma over a century ago.

Doma as a human child.

Doma is outwardly friendly, possessing an approachable and charismatic air, yet undeniably deadly and calculating. Under the belief that he is saving them from their suffering, Doma happily devoured his followers and other young women. While he may appear caring toward his comrades, he doesn't feel even the slightest sliver of grief over their deaths.

Doma is quite nihilistic and lacked human emotion, admitting that, even during his days as a human, the entire concept of emotion is completely foreign to him.[6] Aware that this is abnormal, Doma compensated his empty "heart" with lies, learning to fake his emotions enough to deceive all but the most keen observers. He is a complete psychopath, lacking of empathy even for his dying parents and merely complaining about the smell of blood that hung in the room after their deaths.[6]

In addition to his incapability to feel emotions, Doma had also displayed inhuman amounts of pain tolerance, comparable to borderline congenital analgesia. He had been shown to have several disturbing habits such as sticking his finger into his skull, puncturing a hole straight through his temples, and then fondling and fiddling with his brain in order to stimulate his memories from his long life with a completely serene expression in his face.[7] During his interactions with fellow Upper Ranks, Akaza, he showed no negative reactions to his fellow member delivering two fatal blows to his head,[2][8] in fact, he considered this to be their form of personal "greeting" between two "best friends." Doma has even implied that he actually enjoys these physical abuses as seen when he morbidly asked Muzan with excitement on what type of extreme self harm he should inflict on himself as punishment for his failure,[9] and again expressed delight upon the severe pain he felt at Shinobu Kocho's numerous attempts to poison him to death and even cheerfully expresses his delight on the feelings and sensations of the poison destroying his body and how he might actually grow to "like" it.[10]

Despite leading a cult, Doma is an atheist who staunchly believes that gods, Buddhas, and the afterlife does not exist. He believed that after death there is nothing and that people who "could not accept something so simple" are naive and dumb.[11] However, after his death, he accepted that he is wrong and that Heaven and Hell actually do exist. He also displayed what arguably is his first true emotion—a crush on Shinobu, asking: "Is this what people call love? You're cute, Shinobu."[12]

Overall Abilities: Having held the position of Upper Rank 2, Doma is considered to be the third strongest Demon in the series. His combination of battle techniques and skill is powerful enough to overwhelm and defeat Shinobu, the previous Insect Hashira, without any difficulty and he is also noted to have defeated Kanae Kocho, the previous Flower Hashira, in the past. According to Doma, Akaza, Upper Rank 3, would have no chance in defeating him in battle.[13] Considering this, Doma can be presumed to be an extremely powerful Demon, even though he isn't seen fighting seriously until he is severely weakened by Shinobu's poison.

Doma's techniques involves using his dual Gunsen fans in conjunction with ice and frost for both offensive and defensive purposes.

Retrieved from "https://kimetsu-no-yaiba.fandom.com/wiki/Doma?oldid=80830"
Community content is available under CC-BY-SA unless otherwise noted.