Kimetsu no Yaiba Wiki
Register
Don't have an account?
Sign In
Advertisement
in: Subpages, Characters, Male Characters,
and 3 more
English

Giyu Tomioka ( , Tomioka Giyū?) is a major supporting character of Demon Slayer: Kimetsu no Yaiba. He is a Demon Slayer of the Demon Slayer Corps and the current Water Hashira (, Mizu Bashira?).[2]

Giyu is a tall young man of a muscular stature and pale complexion, who is almost always seen wearing a serious and emotionless expression. He has unruly black hair of uneven lengths that sticks up in tufts around his head, which he wears tied back in a low messy ponytail at the base of his neck. His bangs fall over his eyes in an uneven fringe. His eyes are sharp and moderately large, their irises a deep sapphire that fades to a lighter blue and their pupils a bluish-black, and are framed by thin eyebrows.

Giyu wears a dark cyan-tinted version of the standard Demon Slayer uniform with buttoned white leg-wrapped kyahan and a pair of white zōri with dark blue straps and tabi socks underneath being the same cyan color as his uniform. Over this, Giyu wears a haori that's split down the middle into two different patterns: the right one a solid red, and the left one geometrically patterned with squares of green, orange, and yellow. These haori were later noted to have belonged to his late older sister, Tsutako Tomioka, and his deceased friend Sabito.[3]

During his battle with Muzan Kibutsuji, he loses his right arm.[4] After the fight, Giyu cuts his hair down to shoulder length, now wearing it loose rather than tied into a ponytail.[5]

While Giyu was training under Sakonji Urokodaki, he wore a red haori which would later make up his current one as well as black tucked-in tattsuke-hakama pants and his current white leg-wrapped kyahan and pair of white zōri with dark blue straps. In addition, he also wears the warding masks that are signature to Sakonji's pupils. For Giyu, it is a white fox mask with light blue eyes. 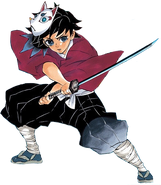 Giyu when training under Sakonji Urokodaki. 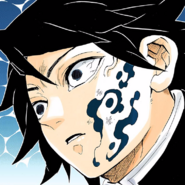 Giyu with his Demon Slayer Mark. 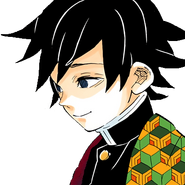 Giyu always wears a stoic and unbothered expression on his face. However, he has a reserved personality and a very strong sense of justice with no tolerance towards those who don't know their own limitations and throw away their lives.[6] Despite letting Nezuko Kamado live due to Tanjiro Kamado's persistence, he shows zero hesitation when killing other demons and has no respect or mercy towards them like most Demon Slayers.[7] Even so, Giyu violated the Demon Slayer Corps' code of conduct without hesitation to protect Nezuko during Shinobu's attempt to kill her. This implies that he doesn't completely despise demons as some other Hashira do, and is willing to make an exception for a demon by letting them live if they don't kill and eat humans. This shows that he is more pragmatic in dealing with demons rather letting his hatred cloud his judgement.

Giyu appears to have a complex with what others think of him and is shocked when Shinobu Kocho claims he is hated by many.[8] Besides that however, he doesn't seem to be hurt by Shinobu's other pokes, even ignoring her. Despite that, they are in fact friends with a good amount of history together. He is a man of very few words and has trouble interacting with others, so he usually keeps himself at a distance.[9] He even goes out of his way to tell Akaza that he hates talking, and wants to keep his name to himself, as he thinks names are not meant to be shared, especially to demons.

It is revealed later on that Giyu suffers from an inferiority complex which he developed since his participation in the Final Selection. It gets severe to the point where he contemplates abandoning his position as the Water Hashira until Tanjiro helps him realize that instead of acting on his survivor's guilt, he should cherish his life and live on for the people who sacrificed their lives for him.[10] This feeling of survivor's guilt strikes again when he believes Tanjiro has died after the fight against Muzan. Giyu, while he sheds tears, admits how he is always the one who is saved.

Despite his aloof and stoic nature, Giyu is shown to be protective and caring towards those he is close to and considers his friends. This is first shown when he puts his life on the line for Tanjiro and Nezuko by vowing to commit seppuku if the latter were ever to eat a human.[11] Giyu has been shown to lose his composure and usual stoic demeanor when those he cares about are in danger, as seen when he is greatly angered by Akaza's attempt to kill Tanjiro and visibly shocked when he hears the news of Shinobu's death.[12] This is further shown in the fact that he still wears half of Sabito, his late best friend's, and his older sister's haori as a memento of them. However, Giyu appears to be particular in who he shows emotions for, as he doesn't appear to react at all when informed of the passing of Genya Shinazugawa, Muichiro Tokito and Kyojuro Rengoku.

Overall Abilities: As a Hashira of the Demon Slayer Corps, Giyu is a very powerful and skilled combatant.[13] From the beginning, Giyu showed how much he outclassed Tanjiro and his friends, being able to effortlessly capture Nezuko from him and later knocked him unconscious in a single blow. Later, he was able to easily defeat the Father Spider Demon in his transformed state[14] and Rui, Lower Rank Five,[15] something Tanjiro and Inosuke respectively failed to accomplish. He also fought equally against fellow Hashira Sanemi in a sparring match. Giyu was also shown easily beating dozens of demons equal to that of the Lower Ranks of the Twelve Kizuki. Giyu is also an incredible teammate able to grasp their intentions and work in tandem with it.

During his fight against Akaza, Upper Rank Three, he was able to hold on his own for some time and like Kyojuro, Akaza is amazed by Giyu's skills to the point that he offers to transform the Hashira into demon, something Akaza only asks of the most worthy of his opponents.[16] When he first awakened his mark, Giyu was able to momentarily overpower the Upper Rank demon too, repeatedly cutting his arms, slicing his body and even cutting his neck. Akaza even states that he has not fought a Water Hashira as skilled as Giyu in fifty years.[17] When he encountered the Demon King Muzan Kibutsuji, Giyu was able to hold him off for a decent amount of time along with Tanjiro and later played a pivotal role in his defeat. Moreover, after Tanjiro became a demon, Giyu was the first to act and fend him off, defending Zenitsu and a kakushi while fighting evenly with him, long enough for him to be turned back to a human.[18]

Demon Slayer Mark: During his battle against Akaza, Giyu awakens his Demon Slayer Mark, appearing as a fluid-water like design on his left cheek, complementing his Breathing Style, Water Breathing.[19] When activated, he gains a tremendous increase in speed, precision, and endurance to the point where he could engage in a long battle against the Upper Rank on even ground.[20]

Immense Speed & Reflexes: Giyu possesses inhuman speed and reflexes, as shown when he took Nezuko away from Tanjiro's grasps at blinding speeds, which took him several seconds to register.[22] Later, he was able to hoist and tie Inosuke up to a tree before he even realized what happened, causing him to remark that he's extremely fast.[23] Giyu also easily caught up to Shinobu when she was pursuing Tanjiro. Giyu cut all of Rui's threads and Akaza's shockwaves so fast that it seemed like he didn't move his arms at all. Furthermore, he blizted and decapitated Rui instantly.[24] He was also able to keep up with Upper Rank Three, Akaza, who is one of the fastest demons in existence and when he awakened his mark, Giyu managed to out-speed him several times and appeared to "teleport" even to Akaza. Giyu also managed to evade many of Muzan's attacks and negate them with dead calm.

Immense Stamina & Endurance: Due to extremely harsh training, Giyu has attained incredible stamina and endurance. In his battle against Akaza, he managed to continue fighting even after sustaining dozens of injuries all over his body, severely weakening him, a feat which pleasantly surprised Akaza. In the Sunrise Countdown Arc, Giyu managed to hold off Muzan despite being initially inflicted with his blood poison, and later still played a pivotal role in his defeat after his hand was cut off by helping Tanjiro turn his blade bright red. After the entire ordeal and when Tanjiro became a demon, Giyu still had enough energy left to fight him off for a brief period of time.[18] Giyu was also one of two Hashira to survive the final battle.

Immense Strength: As a Hashira, Giyu has honed his physical strength to superhuman levels. Even since the first encounter, he has displayed impressive feats, such as swinging his blade with so much force that he caused an enormous gust of wind that knocked both Tanjiro and Nezuko back a far distance. He later held down a berserk demon Nezuko with one hand effortlessly, and later, knocking her unconscious in one strike to the neck. In his spin-off story, he could break extremely strong ropes tied around his wrists with ease while nonchalantly talking to Shinobu Kocho. He could also turn his Nichirin Sword bright red through sheer force with the assistance of Sanemi, a feat which requires an absurd amount of grip strength to accomplish.

Indomitable Will: Giyu possesses an undaunted will and indomitable will, never giving up despite suffering numerous injuries against Akaza, one of the strongest demons in existence and later on the Demon King, Muzan. Even when losing his arm, he still remained steadfast and managed to play an important role in defeating Muzan.

Master Swordsman: Being a Hashira of the Demon Slayer Corps, Giyu is one of the most powerful and skilled swordsman in the entire organization.[25] Upper Rank Three, Akaza, who has fought countless swordsman in the past, was impressed with Giyu's skill, stating that he possesses finely developed swordsmanship.[26]

Standard Nichirin Katana: As a Demon Slayer, Giyu carries around a standard sized and shaped Nichirin katana that is deep blue in color. His sword's tsuba is hexagonal shaped with a bronze core and with an overlapping fuschia border. As a Hashira, Giyu's blade has the words Destroy Demons (, Akki Messatsu?) engraved on the side. With his katana, Giyu has a standard sword sheath that is deep black in color.