Kimetsu no Yaiba Wiki
Register
Don't have an account?
Sign In
Advertisement
in: Subpages, Characters, Male Characters,
and 2 more
English

Gyomei Himejima ( , Himejima Gyōmei?) is a major supporting character of Demon Slayer: Kimetsu no Yaiba. He is a Demon Slayer of the Demon Slayer Corps and the current Stone Hashira (, Iwa Bashira?). Gyomei also serves as the mentor of Genya Shinazugawa.

Gyomei is a hulking figure among the Demon Slayers. He is one of the tallest characters in the series, easily towering over his fellow Hashira. He is powerfully built and extremely muscular. He has spiky black hair and a prominent scar running horizontally across his forehead. Having been blind since childhood, he has white eyes with no visible irises or pupils. His eyes frequently tear-up when he gets emotional.

Gyomei wears a black and white uniform typical of a Demon Slayer, with bandages over his shins resembling kyahan and white zōri with an olive green happi draped over his shoulders. The collared frame of the happi contains the kanji for the Japanese Nianfo/Shin Buddha chant (, Namu Amida Butsu?) from the top-down, along with the separate kanji all over cloth at the back. He also sports a large-beaded necklace around his neck and carries ojuzu when he is not engaged in battle.

His left leg from the knee-down was later severed during his fight with Muzan.[3] 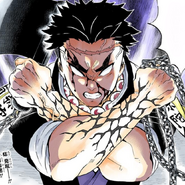 Gyomei embodies the gentle giant archtype, being surprisingly soft-spoken and sensitive, despite his intimidating appearance. He is also shown to be quite pious, carrying his prayer beads at all times and offering prayers in poignant situations. Most notably, Gyomei easily cries over the most insignificant things, accentuating his rather soft nature. This could be due to his love for all living creatures brought about by his religious upbringing, and insinuated when he felt so disgusted by beating up a demon that he would never forget that feeling for the rest of his life.

Like the rest of his Hashira brethren, Gyomei has a great deal of respect for Kagaya Ubuyashiki. He is also one of the most respected individuals among the Hashira, being a symbol of hope due to his immense strength. Furthermore, Gyomei acts as a leader for them, as seen when he sat at the front during a Hashira meeting[4] and was the one trusted by Kagaya to give out orders to them.

Though he maintains a fairly reserved disposition, Gyomei harbors a very objective and somewhat suspicious view of the people around him, owing to his experiences before becoming a Demon Slayer. He is ever-cognizant of what others, particularly children or those younger than him, are capable of if given the opportunity. By reason of his doubtful nature, it can take a while for Gyomei to completely accept and trust others. When he does open up and let others in, he is unwavering in his commitment to them.

Gyomei greatly values the principles that allowed him to achieve his status as a Hashira, rejecting Kokushibo's notion that he must become a demon in order to preserve his body and skills which he was devoted his himself to, and counters by saying that being a Demon Slayer means accepting the fact that seeing tomorrow is not guaranteed and that no one can become a Hashira with Kokushibo's half hearted resolution. Similar to Kyojuro Rengoku, the Stone Hashira also finds that living and dying as humans preserve our dignity. Gyomei even took the Upper Rank's statement as an insult, further accentuating how dearly he holds onto his values.

Overall Abilities: As a Hashira of the Demon Slayer Corps, Gyomei is a very powerful and skilled combatant.[5] He is stated by both Tanjiro and Inosuke to be the strongest Demon Slayer in the entire Demon Slayer Corps.[6] As stated by Tengen Uzui, Gyomei gained the rank of a Hashira in a mere two months.[7] This is further given credence by Kokushibo, who noted that Gyomei's natural physical abilities have been trained to their absolute peak and also stated that in the last three hundred years, he has not encountered a warrior of Gyomei's caliber.[8] He was also able put up a fight against the strongest Upper Rank for a brief time without the use of his Demon Slayer Mark, further showing the extent of his skill.[9] Moreover, Kokushibo noted that Gyomei and Sanemi were two of the more highly skilled combatants, even among the ranks of the Hashira.[10] After the fight, Gyomei, who was injured and slightly fatigued, was able to contribute to driving Muzan Kibutsuji, the Demon King, into a corner.

Demon Slayer Mark: Later during his battle against Upper Rank One, Gyomei displayed that he too, has awakened his mark, appearing as cracked earth fissure-like patterns on both of his forearms.[11] When activated it drastically increases his physical abilities, such as his strength, speed, and stamina, allowing him to fight the Upper Rank for an extended period of time.[12]

Enhanced Hearing: Due to being blind, Gyomei has compensated and alternated his senses to adapt to his condition, effectively developing a superhuman sense of hearing. His sense of hearing was so acute that Gyomei can accurately discern and interact with his surroundings normally, even engaging in high-speed combat with demons without trouble. More impressively, Gyomei was able to hear the sound of Muzan Kibutsuji's flesh regeneration during their brief confrontation and used it to determine that he is unlike any demon he has ever faced based solely on the sound the Demon King gave off.[16]

Later during his battle with Upper Rank One, Kokushibo noted that Gyomei uses the sound of his chains rattling to tell the exact position the chain is in and uses that to guide his axe and flail during combat.[17] As seen during his conversation with Kokushibo regarding the Demon Slayer Mark, Gyomei was able to accurately tell that the he was lying by detecting the slight changes of the sound his body, with Gyomei noting that he heard the latter shake after revealing his deception.

Immense Speed & Reflexes: Despite Gyomei's large build, he possesses tremendous speed and reflexes. He is the third fastest runner among the Hashira. Gyomei's superhuman speed was put on display during his fight against Kokushibo, where he as able to easily move his body around to avoid all of his attacks, the Upper Rank even remarking that the ease and the grace that he moved was almost too absurd to believe.[18] Gyomei was also able to keep up with Kokushibo for the entire duration of the fight, putting pressure on him with the help of Sanemi, Muichiro, and Genya. Later, he was capable of keeping up with the blistering movement speeds of the Demon King himself, Muzan, for a good portion of the fight.

Immense Stamina & Endurance: Gyomei possesses tremendous levels of physical endurance and stamina, so much so that his training during the Hashira Training Arc focused on endurance. He was able to nonchalantly stand on ground that was on fire while carrying two massive logs being further weighted down by four large rocks, even calmly explaining the details of his training to Tanjiro and Zenitsu while doing so. He also displayed his superhuman levels of stamina and endurance during the fight against Kokushibo, where he was able to hold off the Upper Rank for the entire duration of the fight without significantly tiring on top of sustaining slash wounds all over his body.[19][20] After getting one of his legs slashed off by Muzan, Gyomei was able to persist and continue contributing to the fight against the Demon King.

Immense Strength: Gyomei possesses the greatest level of physical strength in the entire Demon Slayer Corps, most notably showcased when he is able to easily lift and swing his massive spiked flail and axe constructed from pure iron at speeds faster than the eye can see incessantly to thwart the attacks of Kokushibo. He was also able to push a large boulder bigger than him through a town with his bare hands.[21] Gyomei also nonchalantly endured the weight of two massive logs on his back further weighed down with four large rocks.

According to Gyomei, he was naturally born with the gift of his incredulous physical strength, as shown when he subdued a demon that attacked him when he was a child by beating it to a bloody pulp with nothing but his bare hands prior to him joining the Demon Slayer Corps and undergoing training.[22]

Repetitive Action: Created by Gyomei, this is a technique which maximizes concentration, in a similar way to Total Concentration Breathing, by remembering a painful memory. Gyomei is shown to use this extensively during his training, and presumably while in combat too.

Tactical Intellect: Gyomei has displayed keen intellect and judgement abilities while fighting. When fighting against Kokushibo, he realised that the Upper Rank was overpowering him in a way that was supernatural but still could be obtained or countered somehow.[23] When he gained access to the Transparent World, he surmised that his eyes gave him the ability to access this special world as well and instinctively learned how to use this to his advantage, even going as far as to manipulating his own blood flow and breathing to disrupt Kokushibo's attacks.[24] Upon seeing Muzan's special constitution, he immediately deduced that he needed to attack all twelve of his vital organs simultaneously to deal significant damage to him.[25]

Kusarigamajutsu: Unlike ordinary Demon Slayers who use swords in combat, Gyomei uses a spiked flail and axe reminiscent of a Kusarigama, a weapon consisting of a scythe and heavy iron weight connected with a metal chain, and thus would use a similar fighting style known as Kusarigamajutsu. As a Hashira, Gyomei is extremely proficient in combat and one of the most skilled combatants in the entire Demon Slayer Corps, particularly in this fighting style which can briefly match the likes of Upper Rank One, Kokushibo, a demon swordsman who has over 4 centuries of swordsmanship experience. Moreover, he was also shown to be able to hold off Muzan and his blisteringly fast whips for an extended period of time, using his spiked flail to deliver powerful blows to the Demon King.

Stone Breathing (の, Iwa no kokyū?): A Breathing Style Gyomei either mastered himself or learned from a cultivator. In his own version of this Breathing Style, Gyomei incorporates his superhuman sense of hearing and physical strength to utilize a spiked flail and axe to use its techniques. As the Stone Hashira, Gyomei is his generation's most skilled Stone Breathing user. He displayed mastery of Stone Breathing in his battle against Kokushibo, where he was able to unleash attacks that were able to match the demon's Moon Breathing.

Nichirin Chained Spiked Flail and Axe: Gyomei wields a swinging/whipping weapon similar to a Kusarigama, consisting of an Ono (axe) attached to a Chigiriki (flail) via a long chain. Still, the weapon was forged from the same materials used in the creation of Nichirin Swords. Its craftsmanship in particular is noted for being incredibly high-class, and even superior to the swords forged during the Sengoku period, when swordsmithing was at the peak of development.[31] Even Upper Rank One, Kokushibo, could not cut through the chain and was forced to instead resort to close-range combat. As noted by Kokushibo, this weapon is very well thought out, as the echoes created by the chain can be picked up by Gyomei's acute sense of hearing to accurately grasp the space and movements around him, further enhancing its effectiveness in battle.[17] On the hilt of his axe, the words Destroyer of Demons (, Akki Messatsu?) are carved.[32]