Robbie Daymond
Hotaru Haganezuka ( , Haganezuka Hotaru?) is a supporting character of Demon Slayer: Kimetsu no Yaiba. He is a swordsmith affiliated with the Demon Slayer Corps.

Hotaru wears a sunflower-patterned haori and a large, woven hat with hanging floral wind chimes. His head is wrapped in a spotted cloth and his face is concealed by a Hyottoko mask (wooden festival mask), similar to Sakonji Urokodaki.

During the Swordsmith Village Arc, he is seen with a more muscular build compared to his initial appearance.[2]

Unmasked, Hotaru is revealed to have long, black hair coupled with sharp eyes and distinctly-shaped thick eyebrows.[3] However upon being attacked by Upper Rank Five, Gyokko, Hotaru now possesses several deep scars and cuts from the Demon all over his body, including an X-shaped one on his face, and has now lost the use of his left eye. 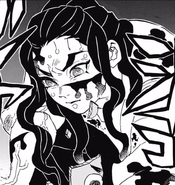 Hotaru is a rather hot-blooded individual. He seems to show very little care, if any, about anything besides the swords he creates. His passion for swords is so strong that he would be able to speak about them for long periods of time, a trait unique even among the people from the Swordsmith Village.

The same passion that gives him the enthusiasm and extreme dedication in creating swords is also the reason why he is easily enraged (usually in a comical fashion) towards swordsmen that break his creations, especially Tanjiro Kamado, no matter the circumstance.[4]

When angry, he usually calms himself down by eating mitarashi dango or by having others pin him down (one method being tickling his sides).[5] It is later on shown that his skills and concentration on swords is so immense that he would lose clients due to his eccentric and asocial behavior and is actually happy that Tanjiro still trusts him in making his swords.[6] His concentration also prevents him from paying any attention to his surroundings when forging a decent blade, even when a demon was attacking him.[7]

At some point, Hotaru was born in the Swordsmith Village and eventually became a swordsmith that forges Nichirin Swords for the Demon Slayers.

Hotaru first appears at Urokodaki's house to deliver Tanjiro's Nichirin Sword after the latter passes the Final Selection.[8] Despite Tanjiro's frequent requests for him to enter the house, Hotaru ignores him and sits outside the door, describing the blade he forged.

After suddenly looking up at Tanjiro, he comments on his red hair and eyes, stating it was good fortune. Excited, Hotaru enters the house while remarking how Nichirin swords would change color and that his sword could turn a bright red, however, after seeing the blade turn jet black, Hotaru shows evident disappointment and gets angry at Tanjiro.[1]

During his fight against Lower Rank Five, Rui, Tanjiro breaks his blade and an enraged Hotaru is briefly seen in Tanjiro's thoughts as he internally apologizes to him and Urokodaki.[9]

After Tanjiro heals at the Butterfly Mansion, he and Inosuke Hashibira greet their swordsmiths but are met with an angry Hotaru charging at Tanjiro with a knife, furious about his broken blade.[10] After chasing him and then calming down, Hotaru and Kozo Kanamori give the swordsmen their blades.

Hotaru appears when Tanjiro comes back from the Rengoku house, enraged over the loss of another sword and chases Tanjiro again.[11]

After Tanjiro wakes up from his coma, Kiyo Terauchi shows him the fierce letters Hotaru sent after his sword got chipped.[12]

Haganezuka is featured prominently in this arc, even having his true face revealed during the attack on the village by two Upper Rank Demons. He proved instrumental in defeating Hantengu, by successfully finishing Tanjiro's blade just in time for the young Demon Hunter to slay him. He suffered severe injuries to his face during the battle, even losing the use of one eye.

Overall Abilities: Being a swordsmith, Hotaru has shown to have no indication of any special abilities similar to the members of the Demon Slayer Corps. Though after Tanjiro broke his Nichirin Sword multiple times against members of the Upper and Lower Ranks, he underwent special training mountains so he could forge a stronger blade for Tanjiro (albeit he wouldn't admit it).

Enhanced Stamina: Mostly used as comic relief, Haganezuka has absurd amounts of stamina, evidenced by relentlessly pursuing Tanjiro for hours from evening to morning, and even made another attempt the following day. In both instances Tanjiro was left exhausted.

Enhanced Strength: After training in the mountains, his increased strength apparently exceeded that of even Tanjiro.

Master Swordsmith: Hotaru is a skilled swordsmith, able to forge the Nichirin Sword and repaired it multiple times each time it broke against the Lower and Upper Ranks. After Tanjiro chipped his sword in his battle against Upper Rank Six, Gyutaro and Daki, Hotaru trained more to make a stronger sword. Hotaru demonstrated his professionalism and expertise when he polished and sharpened the 300-year-old blade left in Yoriichi Type Zero while completely ignoring the wounds he received from Gyokko.

Tantōjutsu: Hotaru is a expert in using a Tantō, using in a form of a clover. He usually shows his skills by attacking Tanjiro after he damages his swords