watch 02:03
Wiki Targeted (Entertainment)
Do you like this video?
Play Sound

Inosuke Hashibira ( , Hashibira Inosuke?) is one of the main protagonists of Demon Slayer: Kimetsu no Yaiba and along with Zenitsu Agatsuma, a traveling companion of Tanjiro Kamado and Nezuko Kamado. He is also a Demon Slayer in the Demon Slayer Corps.

Inosuke is a young man of average height and pale complexion with an extremely toned and muscular build for his age, possessing large, defined muscles most notably over his stomach and arms. In sharp contrast to this, he has an incredibly pretty and feminine face,[3] with large, wide eyes that are framed by an array of long eyelashes, their irises a dark to soft pale green, thin eyebrows and what could be a small, well-mannered mouth. His thick, black hair reaches just past his shoulders, fading into blue at the tips and forming an unruly and uneven fringe that falls just above his eyes, puffing out before curving and thinning towards his forehead.

Inosuke wears his altered version of the standard Demon Slayer uniform, which consists only of the baggy hakama pants, his tinted a dark gray-blue, which he fastens around his hips with a thick belt of fluffy brown animal fur. The usual cloth leg-wraps are replaced with what appears to be knee-high socks of a furry hide which expose his heels and toes, which also appear to be what fastens the sandal-bases he wears on his feet. His most defining feature is the gray, hollowed-out boar's head he wears as to mask his own, the eyes of which he has tampered with to allow himself vision while wearing it,[4] which has been revealed to have belonged to his late adoptive boar mother. 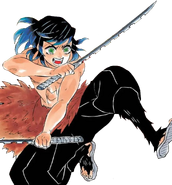 Inosuke is an extremely short-tempered and proud young man who always likes to think he is the strongest fighter in a situation, constantly challenging most people he comes across and wanting others to respect and praise him for his skill. This often leads him into unnecessary danger, since he tends to overestimate his abilities in comparison to who it is he's fighting and refuses to accept when he's been defeated, which can be seen when Giyu Tomioka has to tie him up after his fight with the Father Spider Demon to prevent him challenging the Hashira to a fight while still severely injured from his previous battle.[5] This constant wanting to be the best can also cause Inosuke to be very provocative, as he often tries to goad others, most prominently Tanjiro Kamado, into fighting him, although in the case of the latter he usually fails due to Tanjiro's obliviously kind nature.[6]

Due to him having been raised by boars, Inosuke has also been shown to possess little understanding of normal human interaction, at least at the time of his debut, as he seems to frequently assume that people who approach him want to attack him and doesn't appear to understand the kindness others show him.[7]

However, as the story goes on, Inosuke is influenced more and more by Tanjiro's ways and becomes more accustomed to affection and generosity, learning to also acknowledge the strength of people besides himself and develop feelings of friendship towards him and Zenitsu Agatsuma, although he does still retain his proud nature and constant want for praise. He also begins to think more strategically when engaging in combat, using smarter tactics he has picked up from more experienced Demon Slayers and not just rushing into fights head-on without thinking.

Inosuke's sense of camaraderie drastically improves, best evidenced when he lunged at Muzan Kibutsuji, while mourning the scores of Demon Slayers killed and maimed by the Demon Lord and demanding he returns everything he took from them, or else to die as retribution for his crimes.

Enhanced Strength: Inosuke possesses amazing arm strength, being able to dual wield two katanas as opposed to one, even swinging them at subsonic speeds. During the Hashira Training Arc, he even managed to move a boulder nearly thrice his size with his bare hands.

Immense Speed & Reflexes: Inosuke is an incredibly fast individual, being able to keep up with the movements of Doma and later on, a weakened Muzan Kibutsuji.

Immense Stamina & Endurance: During the Sunrise Countdown Arc, he lasted around half an hour exerting himself to the peak of his physical and mental condition, despite sustaining wounds all over his body.

Enhanced Flexibility: Inosuke is extremely flexible to the point where he can bend backwards so far that his head reaches between his feet.[8] He later displays the ability to dislocate his arm to extend his reach[9] and dislocate any of the joints in his body at will.[10] This flexibility additionally extends to his internal organs, as he was able to shift his heart and avoid it being pierced in the fight against Daki and Gyutaro.[11]

Tactical Intellect: Despite being very wild and short-tempered, he has slowly developed incredible judgement during battle, shown when he could come up with new techniques and forms on the spot when in battle with Doma.

Enhanced Senses: Like all skilled Demon Slayers, Inosuke possesses incredible sharp senses that allows him to detect things normal humans would be totally ignorant to. When Kanao Tsuyuri was about to be killed by Doma's attack, Inosuke sensed it and arrived in the nick of time to save her life.

Animal Imitation: Due to living and growing up with wild boars, Inosuke has learnt to imitate many of their behaviors, which contributed to his proficiency in his Beast Breathing.

Poison Resistance: Inosuke was able to resist and survive the effect of Upper Rank 6's poison although it was considered incredibly deadly, which suggests that he may have complete immunity to some poisonous substances. However, as stated by Aoi Kanzaki, this also means that none of Shinobu Kocho's medicines will work on him, so, if he is exposed to a stronger poison than that of Gyutaro or one that he has not developed a resistance to, they cannot be used as a remedy and he is in greater danger of death.[13]

Repetitive Action: A technique practiced by few members in the Corps, it allow a person to achieve the same effects as Total Concentration Breathing by using repeating pre-set movements or remembering intense feelings to open the five senses and raise their concentration, drawing out the physical powers of the body for an long extended period. It is possible to use both Repetitive Action and Breathing simultaneously, granting the user immense strength able to rival Upper Demon Moons. Inosuke quickly mastered this technique after watching Tanjiro and likes to rephrase "Pig Assault" while doing so.

Indomitable Will: Inosuke possesses an incredible and undaunted will and spirit, never faltering and remaining steadfast and courageous in the face of any foe, to the point where it endangers himself. His will was best displayed during his battle against Upper Rank 2, Doma, where despite sustaining dozens of injuries, he refused to give up and continued to fight the Demon despite his overwhelming power.

Master Swordsman: Nearing the Infinity Castle Arc, Inosuke has polished his swordsmanship to the level of a Hashira, allowing him to keep up with Upper Rank 2, Doma.

Animalistic Combat: Due to growing up with boars in the mountains, Inosuke adopted their habits. This both his hand-to-hand combat style and swordsmanship very reminiscent of animals and beasts. Tanjiro Kamado noted that his unnatural fighting style which reassembles that of a "four legged beast" due to how his attacks come from an extremely low angle while also being very ferocious and incorporating other unorthodox movements, thus making him very unpredictable and very vicious.

Beast Breathing (の, Kedamono no kokyū?): A Breathing Style distantly derived from Wind Breathing and the personal creation of Inosuke Hashibira himself after living in the mountains and fighting for survival.

The Beast Breathing combat style mimics beasts and wild animals, specifically their unpredictable and wild nature, including movements, attacks and senses, and replicates it with the user's movements, techniques and swordsmanship. Most, if not all, known techniques and forms are simple, straightforward yet wild and unpredictable movements and attacks, although one of them, utilizes the powerful sense of touch to replicate an animal's primal senses. When utilized properly, the user visualizes the claws and roars of wild beasts and animals emanating from their weapon, surroundings or themselves.

Dual Nichirin Katana: Like all Demon Slayers, Inosuke harbors a Nichirin Blade, but instead of one, he has 2, both of which he shaped a jagged edge like a beasts teeth and jaws, perfect for tearing through flesh, which is more to his liking. He doesn't have a hilt or scabbard, but rather uses bandages to tie his katanas unlike his fellow Demon Slayers. His dual blades are indigo-gray in color.

Retrieved from "https://kimetsu-no-yaiba.fandom.com/wiki/Inosuke_Hashibira?oldid=83289"
Community content is available under CC-BY-SA unless otherwise noted.