Kimetsu no Yaiba Wiki
Register
Don't have an account?
Sign In
Advertisement
in: Characters, Male Characters, Antagonists,
and 4 more
English

Kaigaku (, Kaigaku?) is a supporting antagonist in the Infinity Castle Arc of Demon Slayer: Kimetsu no Yaiba. He is a demon affiliated with the Twelve Kizuki, holding the position of Upper Rank Six (の, Jōgen no Roku?), replacing Daki and Gyutaro after their deaths.

Kaigaku was a former Demon Slayer and Zenitsu Agatsuma's senior disciple under the former Thunder Hashira (, Nari Bashira?), Jigoro Kuwajima. However, sometime during the Hashira Training Arc, Kaigaku encountered and lost to Upper Rank One, Kokushibo, and surrendered to him to save his own skin, thus becoming a demon and later a member of the Twelve Kizuki.[3]

As a human, Kaigaku is a muscular young man of average height with black hair and turquoise eyes. After becoming a demon, he gains many demonic traits like four black flame-like markings on both sides of his cheeks, fangs, pale skin, black sharp nails, and pointed ears. By becoming a member of the Twelve Kizuki and rising to the position of Upper Rank Six, his eyes are etched with the kanji of "Upper Rank" (, Jōgen?) and "Six" (, Roku?).

Kaigaku is usually seen wearing a black kimono with a blue obi over his Demon Slayer uniform that has yellow flame-like markings near the chest area. He also wears multiple necklaces on his neck and wrist with green colored strings that hold together blue magatama-like pendants that were yellow in color when he was human.

Kaigaku's appearance when he was a child. 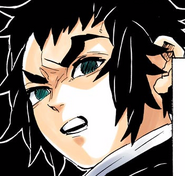 Kaigaku's appearance as a Demon Slayer.

Though outwardly brash and arrogant, Kaigaku is in fact cowardly and selfish. Like many orphans living on the streets, he grew up resorting to thievery and other immoral means to survive.[4][3] He even goes so far as to sacrifice the lives of all the orphans under Gyomei's care to save his own skin. This has caused him to develop an intense form of self preservation, often doing what in his own best interest at the expense of others.

At some point after this, Kaigaku met and became the disciple of Jigoro Kuwajima. Because of his great talent with a sword, he was poised to become the next Thunder Hashira. However, unlike other orphans who join the Corps, Kaigaku never developed a desire to slay demons or protect people. When confronted with a stronger opponent, Kaigaku quickly surrendered.[3] Furthermore, he seems to have developed a sense of hypocritical self-righteousness. He called Zenitsu Agatsuma trash for having no pride or guts and was repulsed at the idea of succeeding Jigoro along with him. Kaigaku also seems to have a twisted perspective of 'right' and 'wrong', believing that those who judge him right (i.e. say he is worthy) are good and those who judge him wrong and have a low estimation of him are evil.[5] Additionally, he also has an inflated ego, viewing himself as a special and gifted person.

In the end, after being beheaded and being at death's door, Kaigaku remains unrepentant and is pleased to know that at least Zenitsu would die with him. However, Yushiro arrives and begins mocking him that he will be given nothing since he never learned how to give, and Kaigaku's fate was sealed once he decided to let his desire inflate and take control of him. Upon seeing Yushiro rescue Zenitsu, Kaigaku screams in anger as the remainder of his body disintegrates.

Kaigaku was an orphan and a thief who had to eat scraps and steal to survive. He was one of the orphans Gyomei Himejima cared for at his temple. After he was caught by the other children for stealing temple money, he was chased out at night and encountered a demon, which he then let in to the temple in exchange for having his life spared.[6]

Kaigaku developed the belief that strength and survival were the only things worth respecting and was willing to grovel and beg for his life if it was what it took to survive. Eventually, he was taken in by Jigoro along with Zenitsu, learning Thunder Breathing. He became determined to become Jigoro's successor and the new Thunder Hashira. Jigoro, however, insisted that both he and Zenitsu would become his successors, despite Zenitsu's weakness and timid nature.

Although Kaigaku isn't seen in person, Zenitsu remembers him in a flashback, where Kaigaku threw a peach at him for daring to call Jigoro Kuwajima "grandpa" while continuing to berate him for still trying to learn Thunder Breathing.[7]

During the Hashira Training Arc, Zenitsu receives word that Kaigaku had become a demon, and that Jigoro committed seppuku as atonement. Kaigaku had the unfortunate luck of encountering Kokushibo and, upon witnessing the Upper Rank's immense power, kneeled before him and surrendered in order to save his own skin. As a demon, Kaigaku had eaten many people and became powerful enough to become the new Upper Rank Six of the Twelve Kizuki by the start of the Infinity Castle Arc.

Inside the Infinity Castle, he and Zenitsu seek each other out. Kaigaku is ultimately beheaded by Zenitsu's Honoikazuchi no Kami technique. Kaigaku frustratingly comments that their master did favor Zenitsu more for teaching him a technique until Zenitsu admits that the technique was his own making in order to fight alongside Kaigaku as equals. Kaigaku notes that Zenitsu was going to die from severe exhaustion, only for him to be saved by Yushiro in the last seconds. Kaigaku's head screams in anger as he disintegrates.

Overall Abilities: As a member of the Upper Ranks, Kaigaku is immensely powerful. Combined with his swordsmanship skills as a proficient Demon Slayer, Kaigaku is an extremely deadly demon. This is supported by the fact that he had to receive a lot of Muzan Kibutsuji's blood for him to turn into a demon as users of Total Concentration Breathing are more resistant to the effects of the Demon King's blood.[8] Zenitsu also noted that Kaigaku had eaten a lot of humans in the short period of time between the Hashira Training Arc and the Infinity Castle Arc, further testifying his strength.[9]

According to Yushiro, during Kaigaku's tenure as Upper Rank Six, he has yet to master his techniques and abilities and could have killed Zenitsu immediately in a year's time.[10]

Immense Speed & Reflexes: As a Thunder Breathing user turned Upper Rank demon, Kaigaku possesses tremendous movement speed and reflexes due to the Thunder Breathing swordsmanship style placing a heavy emphasis on swiftness and bursts of speed.[11] This combined with assimilating huge amounts of Muzan's blood makes Kaigaku an extremely fast fighter as shown when he could more than keep up with Zenitsu, a Demon Slayer that trained under the same teacher to learn the same Breathing Style, and even overpower him for the majority of their brawl.

Master Swordsman: As the one who was initially supposed to inherit Jigoro's position as the Thunder Hashira, it is implied that Kaigaku is an extremely proficient swordsman with great skill in Thunder Breathing. His swordsmanship is different compared to most Demon Slayers as he places his sword sheath at his back rather than on either side of his waists. Still, his swordsmanship skill could match that of Zenitsu who had previously fought Upper Rank demons. With his Blood Demon Art, Kaigaku's swordsmanship was greatly enhanced as well.

Thunder Breathing (の, Kaminari no kokyū?): A Breathing Style Kaigaku learnt from a former Hashira, Jigoro Kuwajima. It was implied Kaigaku was quite talented in learning this Breathing Style, so much so that Jigoro wanted Zenitsu to emulate him.[12] But despite this, Kaigaku was was unable to learn the first and most fundamental form of Thunder Breathing, Thunderclap and Flash, despite being able to learn and master all other 5 techniques of this Breathing Style.[13] Still, some Demon Slayers said that because of Kaigaku's inability to master the first form, the other 5 techniques he learnt wouldn't amount to much.[14]

After becoming a demon and developing a Blood Demon Art, Kaigaku's Thunder Breathing has manifested into reality as he can manipulate actual lightning and electricity, greatly improving the offensive power of this Breathing Style. Kaigaku even stated that he has "surpassed Thunder Breathing".[12]

Electrokinesis: Complementing his Breathing Style: Thunder Breathing, Kaigaku's Blood Demon Art grants him special electrokinetic abilities which allow him to generate and manipulate black colored lightning and electricity from his flesh and blood. This lightning-like Blood Demon Art creates a special effect which cracks and rends his target's flesh while burning it, greatly augmenting the lethality and offensive capability of his attacks.[15] The bleeding caused by Kaigaku's sword effect nearly destroyed Zenitsu's eyeballs and left him severely injured after the fight.[16]

Flesh Nichirin Katana: Like his brethren, Kokushibo, Kaigaku carries around a modified version of a standard Nichirin Sword he used when he was a Demon Slayer that is made from his flesh and blood.[2] However, unlike Kokushibo's katana, his katana isn't heavily distorted and is nearly identical to his original one. His flesh katana has a black lightning pattern on both sides of his yellow tinted blade along with a black and gold handle. As Kaigaku opted for a flesh sword instead of continuing to use his Nichirin Sword, it is implied that his katana his sharper and more durable than a sword that is made from Scarlet Crimson Ore. It can also be assumed that his flesh blade facilitates the use of his Blood Demon Art as he can channel his blood through it when he unleashes his techniques. Along with his katana, he carries a sword sheath on his back, which is deep black in color.