Kanao is a young girl with large, gentle eyes of a pink-lilac color that are framed by thick eyelashes. She has thin black hair, worn tied into a ponytail on the right side of her head and fastened by a pink and green butterfly ornament that once belonged to her adoptive sister, Kanae Kocho.[2] She has a straight fringe and two loose, chin-length strands that curve downwards from above each of her ears.

She wears a slightly purple-tinted version of the standard Demon Slayer uniform, just with a knee-length pleated skirt in place of the usual hakama pants. Over this, she wears a short white cloak, fastened on one side by a dark pink triple knot, also sporting knee-high lace-up white boots with tan soles, heels and toes.

When Kanao reappears after the events of the Entertainment District Arc, her appearance changes as she stops wearing her white cloak, opting to wear only her plain Demon Slayer uniform instead.[3]

Some time later, during her battle with Doma, Kanao's hair also appears to have changed color, as the tips now fade from black to pink.[4] After the fight, Kanao begins to wear Shinobu Kocho's hairpin rather than Kanae's as the latter's shattered as a result of her battle, and she also loses the ability to see out of her right eye due to her using Breath of Flower's final form to take out the Upper Moon.[2] 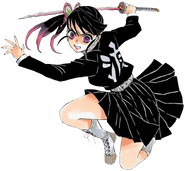 When Kanao is first introduced, she is an indecisive and quiet girl due to the abuse she endured before meeting the Kocho sisters.[5] She became unable to make decisions by herself and repressed her emotions as a defense mechanism. In order to help rectify this, Kanae gave her a coin to flip to decide which path to follow when she didn't know what to do.[6]

For many years, Kanao continued to show little emotion or desire. Despite this, after seeing what demons did to Aoi, Kiyo, and Shinobu's loved ones, Kanao developed a strong hatred against demons directly from her own will.

Initially, Shinobu instructed Kanao to simply cut off demon heads without thinking, since Kanao had no will of her own. However, Kanao also eventually developed her own desire to fight.[7]

Despite her perceived lack of emotion or desire, Kanao defied Shinobu and Kanae's wishes and took the final selection of her own volition, which would imply that her will had been strengthening all along.

Between Kanae's death and the Rehabilitation Training Arc, she recovers slightly but still relies on her coin to make decisions. She displays a somewhat mechanical response in conversations; when Tanjiro Kamado approaches her to bid to her farewell, she repeats "goodbye" when he attempts to continue the conversation.[8] However, he eventually manages to start bringing her out of her shell, and she starts to make more of her own decisions. She also gains the ability to speak unambiguously.[9]

Kanao gradually becomes able to express her emotions and wants more openly, as seen when Tanjiro recovers from his injuries and she displays relief,[10] when she tells Shinobu that she wishes to train alongside her, and when she expresses shock and distress at Shinobu's plan to defeat Doma.[11]

In her battle against Doma, Kanao takes uncharacteristically sadistic glee in pointing out his own lack of emotions. Fueled by hatred and spite due to her sisters' deaths by his hand, she attacks him verbally to the point where he drops his normal carefree demeanor.[12] Kanao also demonstrates extreme determination and a deep care for her family, crying for the first time in the wake of Shinobu's death, and expressing that she had wished to go home together with her elder sister.[13]

Kanao is the Tsuguko of Kanae and Shinobu and has been personally trained by the both of them in the art of combat. As such, Kanao possesses superhuman physical skills, abilities and prowess that potentially marks her as a future member of Demon Slayer Corps' Hashira. Tanjiro, another promising candidate, even states that, during their first meeting together, he could already sense that Kanao was the closest to the Hashira out of the existing Demon Slayers, just by smelling her scent and feeling her aura, which further confirms her skills.

zh:栗花落香奈乎
Retrieved from "https://kimetsu-no-yaiba.fandom.com/wiki/Kanao_Tsuyuri?oldid=52363"
Community content is available under CC-BY-SA unless otherwise noted.