Kimetsu no Yaiba Wiki
Register
Don't have an account?
Sign In
Advertisement
in: Stub, Characters, Male Characters,
and 2 more
English

View source
watch 01:25
Jurassic World: Dominion Dominates Fandom Wikis - The Loop
Do you like this video?
Play Sound
This article is a Stub. You can help Kimetsu no Yaiba Wiki by expanding it.

Head of the Ubuyashiki Family
Leader of the Demon Slayer Corps

Christine Marie Cabanos
Kiriya Ubuyashiki ( , Ubuyashiki Kiriya?) is the only son and middle child of Kagaya Ubuyashiki and the head of the Ubuyashiki Household. After his father's passing, he leads the Demon Slayer Corps as the 98th and final leader.

Kiriya has light, pale skin and large eyes. He has the same hairstyle as the rest of his siblings; a blunt bob with a fringe covering his eyebrows, colored black. As he was raised as a girl, he takes on a more feminine appearance during his first appearance.

During the Final Selection test, Kiriya wears a purple uchikake kimono with patterned flowers and a green obi, supported with a white obiage and indigo obijime along with a white juban under everything. His head is adorned with a wisteria headpiece.

Later on in the manga, after he becomes the leader of the Demon Slayer Corps, he wears a black kimono with a long white haori that's reminiscent of his father. 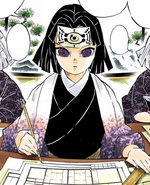 Kiriya after becoming the Corps' leader.

During his first appearance in the series during the Final Selection test, Kiriya portrays himself to be polite, competent, and somewhat emotionally detached having calmly and politely greeted the trainees in sync with his sister, professionally explaining the details regarding the test. He is somewhat unfazed when Genya Shinazugawa roughly manhandles his sister.[3]

Later, upon his father, mother and sisters' deaths, Kiriya shows an entirely different side to himself, displaying his capabilities as a leader. He immediately jumps into his new position and organizes himself to monitor and command the Demon Slayers on their attack against Muzan Kibutsuji and his Twelve Kizuki,[4] despite just losing half of his family and not even properly having the time to mourn them. He shows more mental fortitude and emotional strength in comparison to his younger sisters, who momentarily broke into tears in grief.[5]

However, once his plan results in the slaughter of many Demon Slayers, Kiriya breaks under stress and stops giving orders, much to his sisters' dismay. He is able to pull himself back together after Kanata slaps him.[6]

From the time he was born, his parents raised him up as a girl because he was weak and frail.

Kiriya appears along with his sister, Kanata, at the Final Selection to greet and inform the Demon Slayers in-training of what their last trial will entail.[7]

After the test concludes, Kiriya describes the ranking system of the Demon Slayer Corps[8] and asks the survivors to pick an ore for their Nichirin Sword.[9]

Over a century after Muzan's defeat, Kiriya is still alive and the oldest living person in Japan. This achievement caused him to be interviewed by a reporter, although he remained unresponsive due to his elderly age. The fact he lived so long is proof that the illness which previously cursed their family is now gone along with Muzan.

Extraordinary Memory: Kiriya has shown extremely good memory. He and his sisters are able to map out and memorize the nearly constantly changing Infinity Castle, creating accurate maps to navigate and guide the Hashira through it in real-time.

Foresight: Similar to his father and his ancestors, Kiriya has a high, almost prophetic intuition, being able to make accurate guesses and hypotheses that were often proven right through intuition alone.

Leadership Skills: Much like his father, Kiriya displays advanced skills in leading and commanding an army into battle despite his young age. He is able to immediately take command of the Demon Slayer Corps' command structure and assist the Hashira as logistical support, guiding them into battle.[10]

Longevity: Due to their relative, Muzan, becoming the first demon, men within the Ubuyashiki family were cursed with a mysterious illness, causing them to usually die in their thirties. However, after Muzan's death, the curse was seemingly lifted. In fact, Kiriya was blessed with a unusually long life, still being alive over a hundred years later and currently being the oldest living person in Japan.