Kimetsu no Yaiba Wiki
Register
Don't have an account?
Sign In
Advertisement
in: Subpages, Characters, Female Characters,
and 2 more
English

Mitsuri Kanroji ( , Kanroji Mitsuri?) is a major supporting character of Demon Slayer: Kimetsu no Yaiba. She is a Demon Slayer of the Demon Slayer Corps and the current Love Hashira (, Koi Bashira?).[4]

Mitsuri is a curvaceous young woman of average height and muscular build with a slightly pale complexion and round, pale green eyes with long eyelashes, a small beauty mark beneath each of them. She has long, light pink hair that fades into a lime green color at the halfway point, which she wears in three thick braids. She has five shorter, choppy clumps hanging over her face as voluminous bangs, the tips lime green as well. When she was trying to get married, her hair was dyed black in an attempt to make herself look more "normal." Mitsuri”s Demon Slayer Mark appears as two hearts with winged shapes under the both of the hearts, Mitsuri’s Mark seems to be on the left side of her neck.

Mitsuri wears a heavily modified pink tinted version of the standard Demon Slayer uniform along with a plain white haori that was gifted to her by Kyojuro Rengoku.[5] The chest area of her uniform is left unbuttoned and she wears a short pleated skirt in place of the usual tattsuke-hakama pants. Additionally, she wears a pair of navy blue thigh-high socks layered with the vertically striped lime-green socks Obanai Iguro gave to her and a pair of white zōri with pink straps.

While at the Swordsmith Village, Mitsuri wore a kimono with floral designs.

During her and the other remaining Hashira's fight against Muzan, Mitsuri's left and back braids are cut off by Muzan Kibutsuji's attacks, now shortened to shoulder length, and part of her left ear is also torn at the side.[6] Mitsuri also loses both of her arms in the process of ripping out Muzan's left arm clean off.[7] 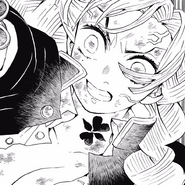 Mitsuri is a very emotional, passionate, and jovial individual who constantly compliments people in her head, likely a contributing factor towards her nickname as "the Hashira of Love." Although she is rather shy and is easily flustered, Mitsuri is always kind to others, most notably towards Obanai, whom she appears to share a strong bond with. However, despite her gentle and seemingly innocent demeanor, Mitsuri will show no mercy in the face of demons, instead expressing such sentiments with a fierce tone. She showcases a great amount of dedication to the Demon Slayers' cause. Despite being put out of commission by Muzan at an early stage in their battle, she was determined enough to return and fight.

Given her desperation for marriage, Mitsuri decided to become a member of the Corps with the purpose of finding a suitable husband stronger than her, a rather difficult task given the astounding level of her physical strength. Upon joining the Corps, she felt an immense amount of guilt for her reasoning behind becoming a Demon Slayer to the point where she ate much less than her typical meals. However, she was able to move past those feelings with the help of Shinobu Kocho and Obanai Iguro.[8]

Besides her rather emotional personality, Mitsuri can also come off as somewhat childlike at times. When she is asked to explain the process of obtaining the Demon Slayer Mark, she describes it using noises and sounds. She is a very caring person, always showing others her love as befits her Hashira title. She can get rather excitable, grabbing her friends for a big group hug after the battle against Gyokko and Hantengu.

When she is slashed by Muzan and taken out of the battle by Obanai, she says she wants to be of use and not drag everyone else down. She even begs for Obanai to come back and not get himself killed. This alludes to her love for him, the person she can finally feel for and be loved by. She shares Obanai's hope that they could reincarnate, meet each other and get married in another life.

Overall Abilities: As a Hashira of the Demon Slayer Corps, Mitsuri is a very powerful and skilled combatant.[9] She is said to have completed the Final Selection within a mere six months of training, which Kyojuro Rengoku considers outstanding.[5] Her abilities were put on display during the Swordsmith Village Arc where she quickly subdued and defeated a group of demons created by Upper Rank Five, Gyokko, and later played a big part in the fight against Upper Rank Four, Hantengu, specifically against his clone, "Zohakuten", which possesses the combined strength of four Upper Rank demons. With the help of her Demon Slayer Mark, Mitsuri was able to fend off the incredibly powerful Upper Rank until sunrise. During the Infinity Castle Arc, Mitsuri held her own against the newly appointed Upper Rank Four, Nakime. Afterwards, she managed to land a surprise technique on the Demon King himself, Muzan Kibutsuji, and played her part in the fight to stall for sunrise.

Abnormal Muscular Constitution: Mitsuri has a special muscular composition, making her muscles eight times denser than that of a regular human. While her limbs are thin, they possess unbelievable strength and endurance capable of maintaining her body's structure after a point-blank sound attack from Zohakuten. To maintain the composition of her body, Mitsuri eats as much as three sumo wrestlers.[10]

Demon Slayer Mark: During her battle against Upper Rank Four, Hantengu's clone, Zohakuten (, Zōhakuten?), Mitsuri had unconsciously awakened and obtained her Demon Slayer mark, that takes the form of two hearts upside down and opposite from each other with angel wings on both sides where the two heart tips meet that appear near her neck, close to her clavicle. When this manifested, Mitsuri's physical strength, endurance, precision and power increased dramatically to the point she was able to stand on equal grounds against Zohakuten, while he was unleashing his most powerful techniques against her.[11]

Enhanced Flexibility: Mitsuri has been noted to possess an extremely flexible body, allowing her to achieve a wide range of motion. She has incorporated her innate flexibility into her Love Breathing techniques, successfully using it to outpace and counterattack Zohakuten's techniques without much trouble. Mitsuri's superhuman flexibility is also displayed in the form of her whip-like Nichirin Sword which is also incredibly flexible. However, only she can make use of the sword due to her pliability preventing her from getting cut while performing high speed actions that make use of incredible ranges of motion.[12]

Immense Speed & Reflexes: As a Hashira, Mitsuri is an extremely fast individual. Despite this, she is the slowest runner out of all her Hashira brethren. However, her techniques have been noted to be faster than the Sound Hashira, Tengen Uzui, who, in stark contrast to her, is the fastest runner out of the nine Hashira.[13] Mitsuri first showcased her exceptional speed when she cut up and killed the spawns created by Upper Rank Five, Gyokko, before they could even react, saving numerous swordsmiths in the process.[14] Her superhuman speed and reflexes were best displayed during her battle against Zohakuten, where she dodged lightning and sound waves produced by the Upper Rank's Blood Demon Art and proceeded to slice through them without much trouble.[15] Later, she reacted to a point-blank sound wave produced by Zohakuten, tensing her body before the attack landed.[16]

Immense Strength: With the help of her abnormal muscular constitution, Mitsuri possesses a level of physical strength superior to average humans, and even matching that of Giyu, Kyojuro, and Sanemi. When she was 13 months old, Mitsuri possessed enough arm strength to lift a rock weighing 15 kg (33 lbs).[10] Her superhuman strength was also displayed during the battle against Muzan, where Mitsuri was able to grab hold of Muzan's arm whip and rip it off with her bare hands, which shocked the Demon King.[17]

Immense Stamina & Endurance: In her battle against Hantengu, despite sustaining several injuries, she still lasted the longest out of Tanjiro, Nezuko and Genya, and stalled them long enough for them to win. Later on during the battle against Muzan, Mitsuri still had enough energy reserves to tear off the elongated arm of the Demon King despite suffering from numerous injuries all over her body and being fatigued.

Master Swordswoman: As a Hashira of the Demon Slayer Corps, Mitsuri is one of the most powerful and skilled swordswoman in the entire organization.[18] Mitsuri makes use of a special swordsmanship style based around her thin and flexible Nichirin Sword akin to a whip sword. Her swordsmanship skill allowed her to quickly subdue the creatures spawned by Upper Rank Five, Gyokko, slicing the demons up at speeds faster than they can react with great accuracy.[19] Mitsuri best displayed her unique swordsmanship style and sword wielding skill during her battle with Zohakuten. Her swordsmanship was so precise that Mitsuri could cut through lightning and sound waves produced by the Upper Rank,[15] and managed to counter and destroy all of his techniques.

Love Breathing (の, Koi no kokyū?): A Breathing Style Mitsuri created herself based on her experience using Flame Breathing, from being the Tsuguko of Kyojuro Rengoku. Love Breathing incorporates elements of Mitsuri's superhuman flexibility and her unique whip-like Nichirin Sword. Using this Breathing Style, she can unleash attacks that cover a wide range of motion as well as long ranges that a normal katana would be unable to accomplish.

Flame Breathing (の, Honō no kokyū?): A Breathing Style that Mitsuri learnt when training under the Flame Hashira, Kyojuro Rengoku. However, although Mitsuri has learnt it, she was not as skillful with it and cannot fight to her fullest using it. Thus, she developed Love Breathing, a Breathing Style more suited to her and can properly make use of her strengths.[25]

Whip Nichirin Katana: Unlike most Demon Slayers who use standard katanas, Mitsuri wields an extremely thin, flexible, and long katana akin to a whip.[26] It was implied to made by Tecchin Tecchikawahara, possibly due to its bizarre shape which requires immense expertise to craft.[27] Due to her sword's structure, only Mitsuri can use it without cutting herself in the process, which can be attributed to her superhuman flexibility.[12] Using this katana, Mitsuri can use techniques faster than that of the Sound Hashira, Tengen Uzui, which can keep up with the attacks of Zohakuten. Her whip katana is pink in color and her hilt is shaped like a 4 leaf clover; the leaves have a pink core with a golden border, with the words Destroyer of Demons (, Akki Messatsu?) engraved on the side. Along with her special katana, Mitsuri carries around a standard sized and shaped sword sheath. Due to her sword's unique shape, Mitsuri folds her katana multiple times to properly sheathe it.[28]