Tsukihiko (By his wife)
Toshikuni (Posing as a child)

Muzan Kibutsuji (, Kibutsuji Muzan?) is a Demon, the first of his kind, the progenitor of many other Demons, and the main antagonist of Kimetsu no Yaiba. He is also the Demon responsible for slaughtering the majority of the Kamado family and transforming Nezuko Kamado into a Demon.[7]

Muzan's physical appearance is like that of a man in his late twenties with an unnaturally pale skin which can be easily confused as being unhealthy and sickly, curly black hair, and sharp, almond-shaped eyes. His pupils are vertical, like cat eyes, and colored plum red. He also possesses sharp, blue nails on his hands that can be used for offense.

In his first appearance, Muzan was shown wearing a white fedora with a red ribbon and a somewhat extravagant outfit. The outfit consisted of an embroidered black tuxedo and a white tie over a black dress shirt and white dress pants. He also wore black loafers.

As seen in Rui's flashbacks of meeting Muzan, the Demon King sported a slightly different hairstyle and outfit in the past than he did in his first appearance. When he met Rui, Muzan's hair was straighter and parted down the middle. He also wore a loose-fitting tuxedo and a white half-cloak over it.

Muzan has the ability to change his appearance and form. During his meeting with the Lower Ranks, he arrived disguised as an elegant woman wearing a long black yukata, causing the Lower Ranks to not initially recognize him.[8] Later, he transformed himself into his latest cover identity - the adopted sickly son to an old couple - taking the form of a young child aged 10 to 11 years old with pale, white skin and black, silky smooth, neatly combed black hair. His main outfit in this disguise is a plain white button-up shirt and black cargo shorts with long tube socks and loafers.

After he neutralizes Tamayo's poison and emerges from his flesh cocoon, Muzan's hair grows in length and turns white due to Shinobu's poison accelerating his age. He also grows numerous mouths all over his limbs, each one lined with a set of incredibly sharp fangs, which he can use on the offence and for regenerative purposes. His skin also appears to have a dark-red mass growing from the ends of his limbs and branching onto his body.[9]

It is later revealed that Muzan has an array of scars across all his body from the wounds inflicted during his first battle against Yoriichi, which were burned down into him to a cellular level and never fully healed despite hundreds of years. These wounds are not visible in plain sight and come to light as he weakens.

During his final struggle, and as a way to slow down the effects of the sun, Muzan adopts an enlarged demonic baby form, approximately as tall as a 3 floor building when standing up. In this form he has very pronounced blood vessels across his body, small claws in his hands and fanged teeth in his mouth. 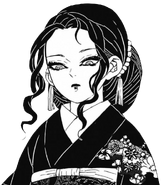 Female form in the manga.

Muzan is cold-hearted, ruthless and exceptionally intelligent. He sees no value in any humans he has encountered and shows little value in his own subordinates. Rarely ever visually upset or happy, he appears completely monotone and detached on most occasions, even when he callously murders his own subordinates. The only times he ever shows emotion are when his vision of perfection is moving forward or when he has subordinates completely submit to his will. The manga shows him to be more expressive, particularly when enraged and his facial features are exaggerated to demonstrate as such (possibly as a way to display his normally unreadable emotions). In the anime, his expressions change slightly and his tone of voice tends to be consistent at nearly all times, accentuating his detached demeanor.

The most prominent trait Muzan possesses is extreme narcissism and an obsession with becoming the perfect being. As he has had nearly 1000 years to live and observe, along with hardly any real challenges, his extreme egocentrism is almost expected. He considers almost nothing to be his concern except overcoming his inability to walk in the sun, which is his primary drive. His long life and obsessions have caused him to want every plan he concocts to be absolutely perfect, and his god complex prevents him from seeing his own failures. His belief that he is the closest thing to a perfect being causes him to have zero tolerance for any failure, brutally punishing those who fail him or those he considers weak, even if the failures are minor.

His inflated ego and delusional sense of self worth are so large that he cannot stand being mocked or corrected in any fashion, believing that others only exist to serve him. It also means he rarely ever takes any opponent or threat seriously. He brutally killed a pair of drunk men simply for being rude to him, and killed their female companion when she had done nothing, all while proclaiming his own perfection and superiority over them. This event hints that Muzan has unpleasant memories of his weaker, human past, and is very self-conscious of his unnaturally sickly appearance, immediately following with a lengthy denial that he is unhealthy, sick and much less on the verge of death. In all likelihood a bitter reminder that he is still imperfect. When he finally managed to confront Kagaya Ubuyashiki, the man responded to Muzan in a tone of pity and sadness for the life he had lead. In Muzan's mind this registered only as insults and threats, which he used to justify his hatred for humanity and the Demon Slayers.

Furthermore, his delusional sense of omnipotence is such that he compares himself to natural disasters, namely something that is far beyond what humans can compare to and fight against. As a result of this he believes the Demon Slayers to be a group of deviants who cannot accept the natural order of things and resume their lives as normal when other people simply move ahead following a tragedy. His analogy evidences his complete inability to feel sympathy or remorse for his actions, given none of the murders he ever committed (directly or indirectly) were the result of an accident but carefully orchestrated acts of pure evil.

He has shown to be fairly manipulative and cunning, being able to blend in human society normally, even having a family of his own to add. A long life and continued practice has allowed him to take on many roles in society and play them capably, including children and women should he choose to. This life has also given him great intelligence and ability to think tactically. Muzan is a quick-thinker and strategist who is able to deal with unfavorable situations rapidly and quite well, though this may also be because the loss of his subordinates means nothing to him in the long run.

Because of his perceived superiority and his double-faced nature, he feels little attachment to his henchmen, using them and discarding them as disposable pawn whenever he pleases. He does not allow his subordinates to question his will, regularly enacting brutal reprisals should they do so. Many of his subordinates, in turn, are deeply afraid of him, and measure their words and thoughts carefully for fear of saying anything to displease him. He is able to sway many Demons to his side with promises of power, revenge and grandeur, as long as they serve him. His intelligence and manipulation shine here since many find the promises quite appealing, as he encounters many of his subordinates at their lowest point, when their emotions are easy fodder for him. Alas, all of these promises are ultimately false, given that Muzan only cares about himself and has no qualms about killing his own men to protect his own safety.

When not hiding behind a facade, his sheer malice and overflowing violent intent, are so incredibly malignant that they can be perceived by others. Most notably Yoriichi Tsugikuni described him as being like boiling magma erupting from a volcano ready to consume everything.

Beyond his egocentric demeanor lies a sense of self-preservation that can easily override his megalomania, paranoically cursing his subordinates in a terrifying manner so that none of them may just as much utter his name, or else be killed instantly in a morbidly cruel manner. When pushed into a corner, Muzan's typically calm, arrogant and superior stance collapse paving the way for panic and fear to take root as he desperately fights for his life, adopting more drastic measures to protect himself. This obsession with survival could well explain Muzan's brutal homicide of three civilians after he met Tanjiro the first time for he was made to remember his sickly past with the former, and his encounter with Yoriichi with the latter, due to his hanafuda earrings, the two major events where he nearly lost his life.

Later, upon his defeat and final moments as he was burning by the sun, Muzan showed a much more vulnerable side to his personality as he slowly disintegrated to ash and lamented on his life and choices. It is revealed that Muzan's true fear of dying and immense desire to live and survive was due to him being born "dead," where his heart would constantly stop in his mother's womb and was assumed stillborn until he fought to breath before his cremation. Revealing that Muzan's desire for "life" and his near constant struggle just to breath as a human, constructed his obsessive ambition to survive, and he truly felt vulnerable whenever he was reminded of his human frailty because of it. Even on the brink of death, he is still utterly unrepentant in his actions of killing, murdering and eating humans for a thousand years and has even stated that as he died, he could not remember a single person he had killed.

However as Muzan slowly died from Sunlight and his final reflection on his life, he came to genuinely accept Kagaya Ubuyashiki's words to him on the fact that everything dies in the end no matter what, and, even he would experience death one day as the only true "immortal" thing in the world are someone's emotions, feelings and memories. This realization brings Muzan to tears and genuinely moves his heart, causing him to then ironically adopt Yoriichi and Kagaya's belief and stance on instead focusing on leaving "something" behind in order to truly become "immortal."

As the first Demon to exist and as the progenitor of all Demons, Muzan is the strongest Demon in existence and possesses tremendous strength, easily being able to hold his own against five Hashira and Tanjiro at the same time. He is later able to put Tanjiro in a state of near death by using his poison in a single attack and would have nearly killed Mitsuri, an incredibly strong Hashira, had she not been rescued by fellow Demon Slayers. Gyomei, Giyu, Sanemi, and Obanai would have also succumbed to his poison if they didn't receive antidotes from Chachamaru. After approximately 30 minutes of fighting against the Hashira, Muzan manifested his Leg Whips, which increased his attack speed exponentially, to a point where he instantly defeated the exhausted Hashira: Gyomei, Giyu, Sanemi and Obanai as well as Zenitsu and Inosuke all at the same time, while leaving Kanao paralyzed with fear and a broken sword.[10] However, it is later revealed that Muzan is gradually becoming slower due to Tamayo's aging medicine, which has been affecting him the entirety of the battle. Despite this, he was still able to easily defeat the Hashira and hold the advantage over Tanjiro in their fight who was slowly mastering Sun Breathing.[11]

Retrieved from "https://kimetsu-no-yaiba.fandom.com/wiki/Muzan_Kibutsuji?oldid=68731"
Community content is available under CC-BY-SA unless otherwise noted.