Kimetsu no Yaiba Wiki
Register
Don't have an account?
Sign In
Advertisement
in: Subpages, Characters, Female Characters,
and 4 more
English

View source
watch 01:40
Boba Fett Returns - The Loop
Do you like this video?
Play Sound

Nezuko Kamado ( , Kamado Nezuko?) is the deuteragonist of Demon Slayer: Kimetsu no Yaiba. She is a demon and the younger sister of Tanjiro Kamado and one of the two remaining members of the Kamado family. Formerly a human, she was attacked and turned into a demon by Muzan Kibutsuji.

Nezuko is a petite young girl with fair skin, visibly large, prominent fangs, and sharp, stiletto nails with a base color of light pink and ombre fading to a red-pinkish color at the end where they point. Her hair is long, black, and wavy. It reaches just below her waist, turning a flame-orange color as it passes her elbows, and appears to be crimped into large, straight ridges, worn side-swept drastically to her left. She has soft-looking, pale pink eyes that appear a lighter color around the rims of their irises, slanted downward toward the sides of her face and framed by notably long eyelashes, the pupils of which can appear slit as she transforms. In the manga, Nezuko can sometimes be shown with more than one bow. According to Tanjiro Kamado, Nezuko was known as a great beauty in their home town.[4]

She wears a light pink kimono with an asanoha (hemp leaf) pattern, the lining a paler pink, secured by a red and white-checkered hanhaba obi with an orange-threaded obijime and a green obiage. Over this, she sports a long, dark-brown haori that reaches her calves, as well as a pair of zōri with pink straps and white tabi socks, wrapped with thick pieces of black material resembling kyahan. Nezuko also wears a small pink ribbon on the left side of her head to keep her hair out of her face, along with the bamboo muzzle Giyu Tomioka gave her,[5] which is secured around her jaw with a strip of red cloth.

When Nezuko transforms into her awakened form during her fight with Daki, she loses both her gag and footwear, as well as the sleeves of her haori and kimono. She grows a short white horn on the right side of her forehead, and a vein-like pattern appears around her left eye, but her most striking new feature is the red and green vine-like pattern that covers her skin, circling around her arms, legs, and chest.

As a human, she had a very similar appearance, the only differences being her lack of demon-like traits, vermilion hair, and pale pink eyes. Instead, Nezuko had fully black hair, worn tied back in three low buns, decorated by pink ribbons, and eyes of a dark red color that only appeared pale pink around their lower irises. She wore the same kimono, just without her haori and with a white Onbuhimo cloth tied around her, which she used to carry her little brother, Rokuta Kamado, on her back.[6]

Nezuko's original appearance as a human. 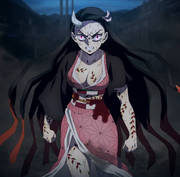 Nezuko's appearance as a child.

As a demon, Nezuko seems to have forgotten a good portion of her memories as a human, besides those related to her family, and thus doesn't retain the exact personality she had before transformation. She is still very caring and protective towards humans who she sees as members of her family, although this is mainly due to the influence Sakonji Urokodaki had on her while she was asleep for two years. Nezuko also retains some of her human emotions, as she has been seen to cry when sad and smile when happy, but in general she appears more detached than her human cohorts, although she is still much calmer and less malicious than most demons. Nezuko also tends to see the images of her siblings in other humans, like Rokuta Kamado in Yushiro.

Since becoming a demon, Nezuko appears to have become also rather brazen, and does not seem to fear fighting; she fiercely guards her brother as well as her allies. She has also developed a strong willpower, which can be seen through her refusal to consume human flesh or blood, even in cases of extreme injury or exposure to human blood, which can be seen when she refuses Sanemi Shinazugawa after he attempts to lure her into biting him with his Marechi blood.[7] Her strong willpower remains even when she is no longer a demon, shown when she willingly leaps in front of Inosuke to protect him from her own brother, who had become a demon and was attempting to kill those around him. Though she could have been killed, Nezuko did not hesitate to protect her brother.

On the rare occasion that Nezuko attempts speech, she has been seen to stutter a lot, which may be due to her bamboo mouthpiece, which is seldom removed, and the fact that she didn't speak for a number of years after her transformation. However, after developing resistance towards sunlight, which allows her to go outside and interact with others more often, her speech has shown signs of improvement and she is able to fully pronounce words if someone else has just spoken them,[8] or hears them repeated frequently enough.[9]

Nezuko's original personality as a human was that of a kind and caring girl who thought of others before herself much like her older brother, Tanjiro. Additionally, she was a responsible elder sister to her younger siblings and often put their needs first rather than her own.[10][11] Nezuko is, however, not afraid to get in harm's way, protecting her friends from demons even after being returned to a human state. It is also shown that Nezuko's humane, laid-back demeanor supports this fact after Tanjiro apologized to her.[12]

Overall Abilities: Despite not being a member of the Twelve Kizuki, Nezuko is a very powerful demon. Her most prominent traits is her extraordinary growth rate possibly due to the high amount of blood she received from Muzan Kibutsuji when he turned Nezuko into a demon and the fact that she doesn't need to consume humans to stay alive. This was shown across many battles in the course of the series where she could defeat her enemies despite being overwhelmed by them in the beginning. She has shown to defeat her enemies by increasing her own physical capabilities, enhancing her regeneration, or developing her own Blood Demon Art in dire situations.

Despite being a young demon, Nezuko has displayed great combat proficiency and skill in battle, overpowering the Temple Demon or the Swamp Demons. Nezuko's accelerated growth also seems to mirror Tanjiro's own incredible growth rate, as she could take on members of the Twelve Kizuki and match Upper Rank demons in months. However, the trait that sets her apart from all other demons is the fact that she has the ability to conquer the sun, prompting the Demon King to call her the "chosen demon".

Abnormal Demon Physiology: As the "chosen demon", Nezuko has several unique demonic traits that set her apart from all other demons. Most notably, Nezuko can continuously restore her power without consuming any humans like any other demon would need to do. Instead, she recovers her strength through sleep alone, though she would have to spend a lot of time sleeping in order to recuperate and regain her power. Moreover, Nezuko has an extraordinary grow rate, as shown multiple times when she grows stronger without any training or consuming humans. This ability is shown to trigger even in the midst of battle and with huge power boosts. This is best exemplified during her battle against Susamaru where her foot was blown by the Temari demon's ball attack, but after regenerating she was able to face her in an even match kicking the ball and eventually surpassing her.

Immense Regeneration: As a demon, Nezuko has enhanced regenerative abilities that allow her to heal in the blink of an eye. When she first became a demon, her regeneration was relatively slow compared to other demons, taking a while to heal slash wounds. However, once in her awakened state, her regeneration ability evolved to the point it matched the caliber of the Upper Ranks, allowing her to reconnect her whole torso and body parts as well as regrow her arms and legs instantaneously. Daki noted that Nezuko's regeneration then surpassed her own.

Immense Strength: Nezuko possesses naturally enhanced physical strength as a demon. Even at the start of the series when she first became a demon, she was strong enough to decapitate another demon with a kick. Nezuko also punched the Swamp Demon so hard that he coughed up blood, even overwhelming the demon with powerful punches and kicks. As she has no combat experience, Nezuko relies on brute strength, using her legs as her main weapon to deliver fast and strong kicks. Nezuko has also shown to increase her strength in battles during dire situations, like strengthening her legs to kick back Susamaru's handballs despite having her legs torn off by them earlier. In her awakened state, she could pierce through the back of an Upper Rank demon with a kick and hold down the clones of Upper Rank Four, Hantengu.

Size Alteration: Upon being transformed into a demon, Nezuko displayed the basic ability to change and alter her body's size and height. She was able to shrink herself into the physical size of a small child in order to fit inside a small box or a basket in order to hide from sunlight when traveling through during the daytime with Tanjiro and could enlarge herself into a much bigger form, in order to be able to battle against demons.

Blood Control: In addition to her Blood Demon Art, Nezuko has shown in her Awakened Form to have immense control of her blood. When she her limbs and head were severed and she was going to be cut into pieces by Daki, Nezuko managed to control her severed limbs and head by instantly congealing and solidifying the blood spraying from them before the streams could break apart. With this she was able to command her limbs to grab and stop Daki's sashes, and, even though it was done with floating, severed limbs connected by blood, able to do with such strength that the sashes were stopped dead in their tracks. She was then able to pull all of her limbs back together through those blood streams, allowing her body to regenerate.[13]

Pyrokinesis: Nezuko's Blood Demon Art allows her to generate and manipulate special demonic flames created from her blood that are pinkish in color. Nezuko can do this by igniting her blood or creating it from thin air. Her flames have a special property which makes it only harmful to demons and objects of demon origin while being completely harmless to humans and other objects. This was shown when her fire could burn Rui's threads, Enmu's dream spell and Genya Shinazugawa who had consumed demons but unable to affect Tanjiro and the Mugen Train. Her flames have been noted to hamper the regeneration of demon's to an extent too, as shown with Daki being temporarily unable to regenerate from being burned by her flames.

Nezuko has shown to be quite proficient in using her Blood Demon Art, from setting demon's on fire to enhance the potency of her attacks, burning off Gyutaro's poison to save Inosuke and Tengen Uzui from dying[14] and turning Tanjiro's Nichirin Sword bright red, which gave him a much needed advantage against Hantengu's clones.

Skilled Hand-to-Hand Combatant: Nezuko's fighting style mainly revolved around the use of her powerful legs and sharp nails. She was skilled enough to fight back the likes of the Upper Rank demons in the Twelve Kizuki, and numerous demons before that. She doesn't use her Blood Demon Arts as often, as using too much blood could make her fall asleep.