Nezuko Kamado (, Kamado Nezuko?) is the younger sister of Tanjiro Kamado and one of the two remaining members of the Kamado family. Formerly human, she was attacked and turned into a Demon by Muzan Kibutsuji. She is one of the main protagonists of Demon Slayer: Kimetsu no Yaiba.

Nezuko is a petite young girl with fair skin, visibly large, prominent fangs, and sharp, claw-like nails that fade to red where they point. Her hair is long, black and reaches just below her waist, turning a vermilion color as it passes her elbows, and appears to be crimped into large, straight ridges, worn side-swept drastically to her left. She has soft-looking, pale pink eyes that appear a lighter color around the rims of their irises, slanted downwards towards the sides of her face and framed by notably long eyelashes, the pupils of which can appear slit as she transforms. According to Tanjiro Kamado, Nezuko was known as a great beauty in their home town.[3]

She wears a light pink kimono with a hemp leaf pattern, the lining a paler pink, with a red and white checkered obi and a thin piece of orange thread looped and knotted around her waist, another band of green above it. Over this, she sports a long, dark brown haori that reaches past her knees, as well as pink zori sandals and white socks, wrapped with thick pieces of black material. Nezuko also wears a small pink ribbon to the left of her head, to keep her hair out of her face, and the bamboo gag Giyu Tomioka gave her,[4] which is secured around her jaw with a strip of red cloth.

When Nezuko transforms into her berserk Demon form during her fight with Daki, she loses both her gag and footwear, as well as the sleeves of her haori and kimono. She grows a short white horn on the right side of her forehead, and a vein-like pattern appears around her left eye, but her most striking new feature is the red and green vine-like pattern that covers her skin, circling around her arms, legs, and chest.

As a human, she had a very similar appearance, the only differences being her lack of Demon-like traits, vermilion hair, and pale pink eyes. Instead, Nezuko had fully black hair, worn tied back in three low buns, decorated by pink ribbons, and eyes of a dark red color that only appeared pale pink around their lower irises.

She wore the same kimono, just without her haori and with a large sheet of white cloth tied around her, which she used to carry her little brother, Rokuta Kamado, on her back.[5]

Nezuko as a human. 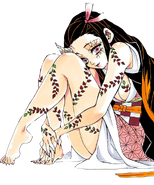 Nezuko's original personality as a human was that of a kind and caring girl, who thought of others before herself much like her older brother, Tanjiro, and was a responsible elder sister to her younger siblings.[6]

As a Demon, however, Nezuko seems to have forgotten a good portion of her memories as a human, besides those related to her family, and thus doesn't retain the exact personality she had before transformation. She is still very caring and protective towards humans who she sees as members of her family, although this is mainly due to the influence Sakonji Urokodaki had on her while she was asleep for two years. Nezuko also retains some of her human emotions, as she has been seen to cry when sad and smile when happy, but in general she appears more detached than her human cohorts, although she is still much calmer and less malicious than most Demons.

Since becoming a Demon, Nezuko appears to have become also rather brazen, and does not seem to fear fighting; she fiercely guards her brother as well as her allies. She has also developed a strong willpower, which can be seen through her refusal to consume human flesh or blood, even in cases of extreme injury or exposure to human blood, which can be seen when she refuses Sanemi Shinazugawa after he attempts to lure her into biting him with his Marechi blood.[7]

On the rare occasion that Nezuko attempts speech, she has been seen to stutter a lot, which may be due to her bamboo mouthpiece, which is seldom removed, and the fact that she didn't speak for a number of years after her transformation. However, after developing resistance towards sunlight, which allows her to go outside and interact with others more often, her speech has shown signs of improvement and she is able to fully pronounce words if someone else has just spoken them,[8] or hears them repeated frequently enough.[9]

Retrieved from "https://kimetsu-no-yaiba.fandom.com/wiki/Nezuko_Kamado?oldid=52362"
Community content is available under CC-BY-SA unless otherwise noted.