Kimetsu no Yaiba Wikia
Register
Don't have an account?
Sign In
Advertisement
in: Subpages, Characters, Male Characters,
and 2 more
English

View source
watch 01:33
House of the Dragon Trailer - The Loop
Do you like this video?
Play Sound

Obanai Iguro ( , Iguro Obanai?) is a major supporting character of Demon Slayer: Kimetsu no Yaiba. He is a Demon Slayer of the Demon Slayer Corps and the current Serpent Hashira (, Hebi Bashira?).[3]

Obanai is a young man of short stature and a pale complexion. He has straight-edged black hair of varying lengths, the longest reaching down to his shoulders and the shortest stopping at his cheekbones, which he wears down with two shorter strands hanging between his eyes. His eyes are almond-shaped and tilt upwards on the far sides, and are unusual due to Obanai possessing heterochromia—his right eye is yellow and his left eye is turquoise. He is partially blind as he can barely see out of his right eye.[4]

Obanai's mouth is also unusual in that, when he was twelve, it was forcefully cut from its corners to his ears to make it appear more like that of a snake, leaving a large wound that he keeps hidden under the bandage he wears over his lower face.[5]

He wears a navy blue version of the standard Demon Slayer uniform, along with a black and white pinstriped haori, the hem and cuffs of which are striped lengthways rather than vertically, which covers his hands. Obanai also sports bandages in place of the leg-wraps around his calves giving the resemblance of Kyahan, as well as another set of bandages that cover his mouth, and white with blue-strapped zōri on his feet. He is also always seen with his white snake, Kaburamaru, wrapped around his shoulders.

During their battle with Muzan, Obanai and the other remaining Hashira are attacked by the Demon's flailing whips, and Obanai is left with three long slanted scratches over his eyes, rendering him completely blind.[6]

When he was a child, Obanai had waist-length hair that he wore tied down his back with a long white bandage and a regular-looking mouth before it got cut by his "family". He also wore a plain white kimono. 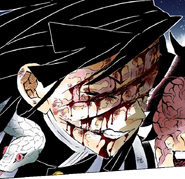 Obanai after being blinded by Muzan.

Obanai is a very harsh and strict individual who shows no concern for those who do not abide by the Demon Slayer conduct. His expectations for his fellow Demon Slayers are nigh-unrealistic, berating Tengen Uzui for suffering heavy wounds against the "weakest" Upper Rank and telling him to "fight to the death" when Tengen insists on retiring. In reality, the Demon Slayer Corps had gone 113 years without killing an Upper Rank,[7] and Shinobu Kocho later estimates that each Upper Rank is equal to three Hashira in strength.

Obanai's devotion to the future of the Demon Slayer Corps comes close to being at others' expense, such as when he tries to force Tengen to stay with the Demon Slayers even after losing an eye and arm, and when he ties up lower-ranked Demon Slayers and uses them as obstacles during Hashira Training for relatively petty reasons. He also sees the newer Demon Slayer recruits as weak and incapable of improvement, expressing surprise when Tengen informs him that Tanjiro Kamado survived the mission.

Despite his merciless personality, there are two people he cares deeply about: Kagaya Ubuyashiki and Mitsuri Kanroji. He has a crush on Mitsuri, which is implied by most of their companions save for Tanjiro and Mitsuri herself; having given her her green socks which she wears as a present. He threatens Tanjiro for growing too close to her (for his tastes) and he is the first person to meet up with her in the Infinity Castle.

Obanai is also noted to possess an immense sense of self-loathing due to the fact that he was born to a selfish and immoral clan who would mercilessly sacrifice to a Demon for their own monetary gain. Obanai considers himself and his family to be so tainted that, in order for him to ever be worthy of Mitsuri, he would first have to die and reincarnate into a whole new being life before confessing his feelings to her.

Obanai has an incredible sense of determination, continuing the fight against Muzan even after he is completely blinded and covered in wounds. His ability to protect Giyu and Tanjiro throughout the fight, as well as thanking Tanjiro for helping him see proves that Obanai is able to drop grudges and become friendlier with people he was rude to prior.

Demon Slayer Mark: During the battle against Muzan, Obanai awakened his own mark.[8] That took the form of three snake like tattoo patterns with large dots, stretching from his right arm to the right side of his chest that then boosted all of Iguro's natural abilities, as seen where he was able to land powerful sword slashes against him, swiftly dodge and maneuver himself to avoid all of Muzan's immensely fast attacks, increase his physical stamina and durability allowing him to fight despite being severely injured and greatly enhancing all of his physical sense to the point that he could easily fight despite being blinded. Despite this Obanai admitted that for majority of the fight he had done less than anyone else.

Enhanced Strength: Obanai possesses great amount of physical strength, as shown when he pins Tanjiro Kamado to the ground with great force, with Tanjiro stating that he couldn't move or breathe.[11] Despite this, however, he is considered to be the second-weakest member of the current Hashira in physical strength after Shinobu.[12]

Kaburamaru (, Kaburamaru?): Obanai, having always been partially blind in his right eye, developed a combat technique utilizing his snake Kaburamaru. Kaburamaru is able to read enemy attacks and then relay that information to Obanai. The full extent of this technique is demonstrated when Obanai is completely blinded by Muzan, but he is still able to continue fighting as if nothing happened.[13]

Immense Speed and Reflexes: Although this may largely be down to the power of his crimson blade, Obanai is seen to be incredibly fast when in combat during his fight against Muzan. Even when blinded, he's able to swiftly jump in and save Tanjiro from what would likely have been a lethal strike from Muzan's whips when he makes a blunder, and dodge many of his next attacks which instead annihilated the buildings in the surrounding area.[13]

Immense Stamina and Endurance: Obanai has displayed some incredible feats in the series. He was the first to recover in the Sunrise Countdown Arc after Muzan incapacitated all the Hashira. Working with Tanjiro, Obanai managed to survive over an hour in combat with Muzan Kibutsuji, when his other allies, Giyu Tomioka, Sanemi Shinazugawa, Mitsuri Kanroji and Gyomei Himejima were unconscious or incapacitated. Despite Muzan unleashing powerful attacks one after the other like his Shockwave Scream, Obanai still refused to give up and even managed to save the life of Tanjiro Kamado multiple times. Nearing the end of the battle, he still had enough energy to muster a technique.

Master Swordsman: As a Hashira of the Demon Slayer Corps, Obanai is one of the most powerful and skilled swordsmen in the entire organization.[14] During the Hashira training, he taught sword skill revision training to the other Demon Slayers, further showcasing his skill with a sword.[15]

Serpent Breathing (の, Hebi no kokyū?): A Breathing Style Obanai created himself and has mastered.

Twisted Nichirin Katana: Obanai harbors a heavily modified Nichirin katana similar in appearance to an Indonesian Kris Sword, with the sword's shape modeled into waves resembling a twisting snake, which is lavender in color. His katana's hilt has a gold circular shape engraved with two snakes connected by several plant-like patterns. The words Destroy Demons (, Akki Messatsu?) is engraved on the side. Obanai also carries along a special scabbard made of leather held together by a weak magnetic pull that opens up whenever he uses his katana.