Sabito (, Sabito?) was a former apprentice of Sakonji Urokodaki. He appeared to assist Tanjiro Kamado in his preparations for the Final Selection exam.

Sabito was a fair-skinned young man with a large scar running from the right corner of his mouth to his right ear, and kind, cat-like eyes of a grayish lavender color, a horizontal bar of much paler purple visible across them near the bottom. He had thick, spiked, peach-colored hair of varying lengths, the longest reaching his shoulders, that he wore messily down with side micro bangs over the left of his forehead.

Sabito wore a green kimono, patterned with a geometric hexagon design of yellow and a darker green, tied off at the waist with a piece of black fabric, below which he sported a pair of tattsuke-hakama pants and over which a plain white haori. Around his calves, he wore a pair of kyahan, that bore the same design as his kimono, which his pants were tucked into, as well as black tabi socks and a pair of zōri on his feet. As with the rest of Sakonji Urokodaki's apprentices, Sabito's white warding mask, hand-carved by his master himself, took the shape of a fox's face, his decorated by a large scar in the same place as the one on his face. The mask's eyes and nose were of a dark green while the ears were more of a gray-red, and it was secured around his face by a thick piece of red rope around his head, the ends of which hung down from behind each of his ears.

Sabito's unmasked face in the manga. 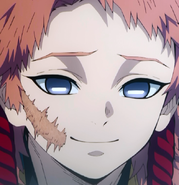 Sabito's unmasked face in the anime.

Sabito was a serious young man who believed that all of his actions should be becoming of a man. He was seen as a ruthless mentor during his time training Tanjiro Kamado, who was always quick to point out his flaws and refused to acknowledge him as a man. When asked about defeating the Hand Demon, Sabito appeared to have a pessimistic view on conflicts, saying he believed that no matter how hard someone tries it will never be enough to take the beast down.

Even so, Sabito entrusted his will to Tanjiro and was happy when he surpassed him as Sakonji's strongest student, openly acknowledging that Tanjiro was the toughest of them all and proudly leaving the lingering will of all Sakonji's lost children to him.

According to Sabito's best friend Giyu Tomioka, he was a very kind boy with a strong sense of justice, back when he was still alive. It is implied that Sabito was a selfless person, as seen in Giyu's flashback, when it is revealed he saved everyone in his group from the Hand Demon during his Final Selection, sacrificing himself in the process.

Sakonji took in Sabito and Makomo after they were both orphaned, where he met Giyu, training them until they became strong enough to enter Final Selection to potentially become Demon Slayers.

During his seven days on Mt. Fujikasane, Sabito, after ploughing through many demons and saving many of the other to-be slayers, encountered a powerful morphed Demon who desired to devour all of Sakonji's students. In an attempt to kill it, Sabito's blade breaks on the demon's thick neck, and he dies by the Demon's hands.[1] Sabito was the only one who didn't pass his year's final selection. His yukata was taken by Giyu, who now wears it in memory of his best friend's sacrifice.

Makomo and Sabito's souls return to Mount Sagiri, as they cannot rest due to their failure and Sakonji's grief. Although, as Makomo was adopted and died a period of time before Sabito, they didn't meet each other in person until after he died.

Unable to rest after failing to return to Sakonji, Sabito and Makomo's souls find their way back to Mount Sagiri, where they reside from then on. Sakonji eventually takes on a new student named Tanjiro, and, after one and a half years of training, Tanjiro is still unable to pass Sakonji's final test: splitting a boulder using his sword.

Sabito sits atop the boulder, appearing before Tanjiro as he laments over his lack of progress, and tells him that a man should grieve in silence. He attacks Tanjiro and easily kicks him aside after a short clash of their weapons, saying that Tanjiro is slow, weak, and immature and telling him these are not the qualities of a true man.[2] Tanjiro asks Sabito what he's doing, and the latter responds with the same question, continuing to ask how long Tanjiro plans remain on the ground. After he gets up, Sabito asks him to come and fight, but Tanjiro expresses concern over using a real katana against Sabito's wooden sword. Amused by the fact that Tanjiro thinks he can really harm him at his current skill level, Sabito laughs before rushing at his opponent.

Sabito's wooden blade pressures Tanjiro just like a real one would. The masked boy claims he's the stronger of the two and denies the idea that he might get hurt, also revealing that he already sliced the boulder before. Sabito leaps through the trees, using his extreme agility to throw Tanjiro off before striking him down. Sabito tells Tanjiro that he hasn't mastered a single form of Total Concentration Breathing, claiming that Tanjiro has only memorized the practices and needs to slam those lessons into his flesh instead if he really wants to learn them. He pressures Tanjiro with a flurry of slashes and demands that he never forget the secrets he learned from Sakonji.

Tanjiro claims he's working hard but can't make any more progress, and Sabito tells him to act like a man and go further to surpass his limits. He wants to see what Tanjiro is capable of in this fight and defeats him shortly after using a powerful uppercut swing. Sabito then entrusts the remainder of Tanjiro's training to Makomo.

Tanjiro continues to challenge Sabito throughout his training but is never able to win, or at least not until six months later. During their final duel, Sabito brings a real katana instead of a wooden one, and, on that day, Sabito finally says Tanjiro has the look of a man. The fight ends in an instant, as Tanjiro's blade finally reaches Sabito first, splitting his mask. Sabito's face is revealed, and he's smiling, proud of his successor. He disappears and Tanjiro realizes that he's finally sliced the boulder.[3]

As Tanjiro bides farewell to Sakonji, he asks him to greet Sabito and Makomo for him, leaving Sakonji confused. Hinting at the fact that the two were actually ghosts, Sakonji wonders where Tanjiro got those names from. After Tanjiro leaves for his Final Selection, Sabito sits atop the boulder, continuing to watch over him with Makomo, who asks if Sabito thinks Tanjiro can avenge their deaths. Sabito says isn't sure because they lost despite their bests efforts.

Tanjiro learns the truth about the deaths of thirteen of Sakonji's children at the hands of the morphed demon. Enraged, Tanjiro rushes into attack recklessly, but Sabito reminds him to calm down because his breathing is uneven. He asks Tanjiro to forget about the others for now and focus on the task at hand. Makomo starts to lose hope and questions if Tanjiro will die too. Sabito tells her the outcome can go either way, however, there is one irrefutable fact: Tanjiro is the man who sliced the largest, toughest boulder of all. The Hand Demon believes he can defeat Tanjiro the same way he did Sabito, but Sakonji's newest student slays the demon and avenges all the fallen children.[1]

Tanjiro wins and the souls of all of Sakonji's children can rest in peace. Satisfied that no more lives were being lost to the demon, and that their master would get one of his children back, Sabito leaps off the boulder and disappears into the mist, bidding farewell to Tanjiro.[4]

Sabito appeared in a flashback, when Giyu Tomioka mentions that him and Sabito were entered in the same Final Selection, as they were both pupils under Sakonji Urokodaki. Sabito was the only one killed in that Final Selection, being able to protect the other participants from being harmed by the grotesque Hand Demon.

Expert Swordsman: Sabito was a very skilled swordsman, as seen during his Final Selection exam, in which he was able to kill nearly all of the Demons on the wisteria flower mountain single-handedly and save all the other participants,[7] a feat that even Tanjiro was unable to accomplish as he was busy protecting himself.[8] Throughout Tanjiro's training, Sabito was also able to repeatedly defeat him while wielding a wooden sword, even though Tanjiro was using a real blade,[9] and, during their first battle, Sabito showcased enhanced speed, agility, and reflexes that easily outclassed those of Tanjiro at the time. It eventually took Tanjiro six months of training before he was able to defeat Sabito.[10]

Water Breathing (の, Mizu no kokyū?): Sabito was a skilled practitioner of the Water Breathing, which he used to single-handedly kill almost all the Demons inhabiting the wisteria flower mountain during his Final Selection exam.

Katanas: Sabito possessed both a wooden sword and a real sword. He was very proficient with the wooden sword against Tanjiro, even though the latter was wielding a real blade.