Kimetsu no Yaiba Wiki
Register
Don't have an account?
Sign In
Advertisement
in: Characters, Female Characters, Demon,
and 2 more
English

Erica Lindbeck
The Spider Demon (Daughter) (「」, Kumo oni: Ane?)[1] was a member of the Spider Family.

The Spider Demon Daughter's physical features are very similar to that of her "Younger Brother," Rui. She has the looks of a demon girl in her early teens with a completely pale, milky-white skin complexion, snow white hair, and pure white eyes with only her silvery pupils separating them from her sclera. She also possesses several red, dot-like patterns on her face similar to her "family".

The Daughter's original appearance as a demon was completely different than her current, having morphed and changed her features due to being forced by Rui as a condition to be accepted into his family. Her original appearance was that of a teen demon with black hair, slitted cat-like eyes and pale grayish skin. 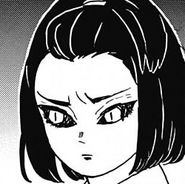 The Daughter Spider Demon is shown to be the most cautious within her "family," having instead opted to observe and stand back rather than jump right into the battle against Demon Slayers. She is also shown to be very cowardly, both with battling against the Demon Slayer Corps and dealing with her family's internal conflict. When her "Mother" was being violently abused and reprimanded by her "Younger Brother" and her "Father," she stood back and gave her "Mother" the same severe glare due to her weakness instead of helping her. She again shows her cowardice by trying to convince Rui to run instead to fight after most of their family was defeated, which enrages him and leads him to wound her.

In truth, the Daughter Spider Demon loathes and hates her "family" and had begun thinking that she would have likely done better on her own. She believes that the rest of her family are idiots for playing along with Rui, despite him not having any real emotional attachment or care for any of them. She nonetheless did whatever it took to survive and stayed with them, knowing she stood no chance of surviving if she were to try to escape. She even went as far as attempting to use sympathy and pity on Shinobu Kocho, knowing that she was a demon slayer, by pleading that she was forced into her situation by Rui. However, this contradicts her actions as she went through various lengths to stay with him and his family, revealing that she only does what is convenient for her own survival. She later shows herself to be gullible enough to fall for Shinobu's fake sympathy and begin to openly admit her total count of human victims.

Originally, the Daughter Spider Demon was a lone demon girl who decided to team up with Rui's group on Mount Natagumo in order to survive out of fear of the Demon Slayers. Rui forced his new "family" to abandon their previous appearances and faces in order to match his. The Daughter Spider Demon was compelled to be his "Older Sister" and protect him using her own life, due to his belief that the older sibling should always shield the younger sibling. She and her family then began preying on the native humans from around the mountain, which brought about the attention of the Demon Slayer Corps and led to them sending scores of their Demon Slayers in an attempt to rid the mountain of the demons.

The Older Sister Spider Demon herself managed to kill at least 80 or so humans during her time on the mountain. She successfully stored them inside her thread sacks using her Blood Demon Art for later meals, which were soon found by Shinobu when she stepped inside the Mountain with Giyu Tomioka to help the Slayers.

In her first appearance, the Daughter Spider Demon was spotted by Tanjiro Kamado and Inosuke Hashibira few after the death of the Spider Demon (Mother). She screams for the Spider Demon (Father)'s help and runs away, leaving him to fight the two Demon Slayers on his own. Sometime later, she is confronted by Rui; he uses his own threads to wound her on the face and she doubles over in pain, blood and tears. Tanjiro, who was tossed away by the Spider Demon Father, steps in as this happens, however.

The Daughter Spider Demon witnesses Tanjiro, Nezuko and Rui's fight, but doesn't directly intervene. When Rui says he wants to take Nezuko as his sister, the Daughter begs him to not abandon her and he beheads her instead, saying she does not fill her role as his older sister. He then gives her one last chance to kill everyone else in the mountain, promising to forgive her for a "certain incident", and she picks up her own head and leaves.

As the fully healed Daughter Spider Demon runs away in a panic, she recalls how she and the rest of the Spider Demon Family joined Rui out of a desire to be protected, only to be abused, punished and even executed by Rui if they failed him. She thinks to herself that she's not as stupid as the other Demons, and also recalls the exact reasons why Rui hurt her a few ago: for telling him that they should run away from the Demons Slayers, and especially for accidentally reverting to her old looks.

The Daughter finds Murata the Demon Slayer and traps him in an acid cocoon with her Blood Demon Art, telling him how the acid inside the thread sacks will first dissolve his clothes and then melt the rest of him...

Shinobu suddenly appears behind the Daughter Spider Demon, inquiring if the strings came out of her palms, wishing the creature a good evening, and commenting on the beauty of the moon that night. Startled, the Demon attacks the Demon Slayer with her strings, but Shinobu dodges them all effortlessly. Drawing her sword, Shinobu dryly comments that this attack means the Demon doesn't want to get along with her.[2]

The Daughter Spider Demon quickly begs Shinobu for mercy, stating that she would be killed if she disobeyed Rui. Shinobu, sympathizing with the Demon's plight, says that she will cooperate with the Demon if she answers a few of Shinobu's questions, the first of which being how many people she had killed. The Demon's answer is five, but Shinobu assures her that she doesn't have to lie, complimenting her string technique from earlier, and corrects the Demon's answer to eighty humans.

Despite the Demon's stubborn denial, the female swordsman notes that both of them came from the west side of the mountain, and, on that side, she had found forty of the Demon's cocoons. Shinobu adds that she isn't angry, only trying to be as accurate as possible. When asked what the point of checking this information is, Shinobu tells the elder sister Demon that in order for them to be friends and to satisfy those who have died, she will have to endure punishment, explaining in gruesome detail what she had in mind for this, and adding that the Older Sister Spider Demon won't die from it, so there will be no aftereffects.[3]

Enraged, the Demon attacks Shinobu again, but the female Demon Hunter quickly bypasses her, simultaneously landing her Insect Breathing, Butterfly Dance: Caprice attack on the Demon. She laments the Demon's poor choice, turning and subsequently watching as the creature collapses. Shinobu tells the creature not to let her guard down just because she can't cut the Demon's head off since, she explains, she utilizes poison as her weapon instead. Shinobu then introduces herself as the Insect Hashira of the Demon Slayer Corps, stating that, although she may be the only one among her order to not possess the ability to cut off a Demon's head, poison that can kill the Demons is still a potent tool. She then apologizes, realizing that the elder sister Demon is already dead and couldn't hear her explanation.

As all of this happens, the Daughter Spider Demon at first thinks that Shinobu's Butterfly Dance: Caprice just did not behead her. However, she soon starts bleeding from several spots on her forehead, her chest, her mouth and her arms. By the time Shinobu fully introduces herself, the Daughter is effectively lying dead on the floor, her body twisted in agony and with several wounds.[4]

Shapeshifting: The Daughter Spider Demon appeared to have enough skill and talent in shape-shifting in order to alter her physical appearance to match Rui's in order to fulfill his desire for a family. However, if frightened or startled, her physical appearance returns to its original form, showing that she needs to keep conscious effort to maintain her new physical characteristics.

Silk Manipulation: Like her "mother" and Rui, the Daughter Spider Demon can manipulate threads made from her own cells, this time in a fashion similar to silk that forms a cocoon instead of threads that resemble wires. Despite being extremely soft, her silk is stronger and more durable than metal, even a normal Demon Slayer can't cut or pierce it with a Nichirin Sword.

Acid Manipulation: The Daughter Spider Demon can manipulate and generate acid made from her own blood and flesh. The acid she creates can easily dissolve a person though the process is a little slow.