Tanjiro Kamado ( , Kamado Tanjirō?) is the main protagonist of Demon Slayer: Kimetsu no Yaiba. He is a Demon Slayer in the Demon Slayer Corps, who joined to find a remedy to turn his sister, Nezuko Kamado, who was turned into a Demon, back into a human.

Tanjiro is a young man with rather tanned skin and an athletic physique. He has ruffled, black hair with burgundy tips, combed back to expose his forehead, and wide, dark red eyes with white pupils that appear lighter around the lower section of his irises. He also has a scar on the top left of his forehead, which he received when he protected his younger brother from a falling brazier.[5] The scar originally looked somewhat like a graze until his fight with the Hand Demon during the Final Selection, after which it develops into his Demon Slayer Mark. It is noted that his hands are visibly rougher for someone his age, as a result of his rigorous training under Sakonji Urokodaki. Tanjiro looks remarkably similar in appearance to his ancestor Sumiyoshi, possessing the same facial structure, eyes, and hairstyle as him, although Sumiyoshi's hair was longer, about shoulder-length and would be tied in a ponytail behind his head.

Tanjiro first appears wearing a checkered, black-and-sea-foam-green haori over a white robe and black pants. He occasionally sports a turquoise scarf and is seen with circular, white bands looped around his calves. He also wears a distinct pair of hanafuda earrings, with the image of a white-and-red flower. His hair is also kept tied back in small ponytail or bun; as he trains with Sabito and Makomo, his hair grows to his shoulders.

During the Final Selection, Tanjiro wears a blue, cloud-patterned jinbei-styled kimono and black pants, nearly identical to Sakonji's outfit. He still wears his hanafuda earrings, but his hair is cut extremely short and remains the same length since. Similar to the rest of the apprentices that were trained under Sakonji, Tanjiro wears a hand-carved fox mask crafted from his master on the left side of his head. The mask has red accents on the eyes, ears, and spots on each corner of its mouth. On the upper right corner of the mask, there is a sun-shaped design that likely symbolizes the scar on his forehead.

After becoming a Demon Slayer, Tanjiro wears the standard Demon Slayer uniform, a dark-brown gakuran jacket, a white belt, baggy pants that extend into tabi socks, a pair of zōri with red straps, and bands of white cloth wrapped tightly around his calves, all beneath his signature checkered haori. He carries a large wooden box on his back (which was a gift to him from Sakonji Urokodaki), where his sister sleeps as they travel during the day.

During his second encounter with Muzan Kibutsuji, he injures his right eye in the Infinity Castle. As the battle progresses, Tanjiro suddenly collapses and his wound begins to form a large mass over his right eye due to the poison inflicted on him by Muzan. Later on, when Tanjiro wakes up, he is described as looking 'repulsive' by Muzan.[6] Later in the battle Tanjiro's left arm is severed by Muzan.[7]

After being turned into a Demon by Muzan, Tanjiro is able to heal the growth on his face as well as regenerate his lost arm and other smaller injuries. He obtains eyes with slit pupils, fangs and flame-shaped marks over his left forehead and right jaw that are reminiscent of those of Kokushibo, in addition to a third, smaller flame-shaped mark coming down from the right side of his head down to his eyebrow after he conquered the weakness to sunlight. His scar turns into a flame-pattern as if it were a permanent Demon Slayer Mark, has become longer and is the largest of the three, and all three marks vaguely point towards his nose, though only his scar-mark reaches it. He still dons his bloodstained corps uniform, one sleeve ripped off where his arm was severed, but loses his checkered haori and the Nichirin Blade at his hip.[2]

After returning to his human form, Tanjiro loses the ability to see from his right eye, the iris of which is now a dull pink-gray color and the pupil black rather than its original white. His left arm, which he regrew as a Demon, now takes the appearance of that which an older person may have, becoming wrinkled and skeletal, and he loses all feeling in it below the elbow and thus the ability to move it from his shoulder down.[8]

Tanjiro's face after being poisoned by Muzan. 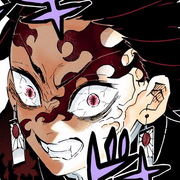 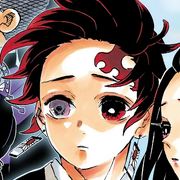 Tanjiro is kind by nature and has been described by others as having very gentle eyes. He exhibits a great deal of determination and will not give up once he has a goal to achieve; the best example of this being his relentless quest to find a cure for Nezuko. Even though he is relatively strong on his own, Tanjiro isn't opposed to asking others for help when he needs it. He is very protective of his friends and even more so of his younger sister. However, despite his kind and understanding nature, Tanjiro does have a limit to his tolerance and has a distaste for rudeness and cowardice as he easily becomes annoyed by Zenitsu Agatsuma's constant whining, and angered by Inosuke Hashibira's barbaric actions.

Tanjiro's most notable attribute is his ability to empathize with anyone, even Demons, which often makes him hesitate before delivering the final blow. This moment of hesitation has a downside, as it has allowed some Demons to take advantage of Tanjiro's understanding nature to recover and continue the fight on rare occasions. However, as Tanjiro gains experience over the years of his service, he becomes more calculating and strict in his decisions. His courage to protect the weak commits him to face his enemy with respect and dignity, whether versus good people or evil Demons.

Under Tanjiro's rather kind and friendly shell, is a person with a growing fire of rage and vengeance inside of them. This side of him leaks out when Tanjiro first confronts Muzan, ready to take out his sword and attack him. When Muzan escapes, Tanjiro releases his frustration and declares he will be the one to kill Muzan. In another event, when the Demon Slayers have their necks snapped by the Mother Spider Demon's threads, Tanjiro shows noticeable anger that even Inosuke senses. This side of Tanjiro fully comes out after Muzan's speech where he compares himself to a natural disaster. Tanjiro responds to that by calling Muzan "a being that should not exist."

As a Demon, Tanjiro appeared to be mindless, like most initially are following their transformation. He acted like a feral beast, attacking anyone in sight without any hesitation. Not even his friends and comrades were safe. The one exception was Nezuko, who he refused to harm even after tasting her blood; a possible sign that he was fighting his transformation. His hostility towards the Demon Slayers might also have been due to his mind being affected by Muzan's desire to kill all Demon Slayers.

Overall Abilities: From the start, although not a part of the Demon Slayer Corps, Tanjiro was able to catch Giyu Tomioka, the Water Hashira off guard. After starting his training in the Water Breathing, he has become also to take on multiple demons including a former Lower Rank 6, Kyogai. After recalling the Hinokami Kagura, he learned from his father as a child, he would've defeated Rui, Lower Rank 5, if Rui hadn't cut off his own head prior. After awakening his Demon Slayer Mark and training even further, Tanjiro has proven to be able to hold his own against even the Upper Rank like Akaza, with Giyu even comparing his strength to that of a Hashira. After getting poisoned by Muzan and having a mysterious vision of his ancestors, Tanjiro was able to fight against Muzan by himself, who had just single-handedly defeated all five remaining Hashira along with Zenitsu and Inosuke. Muzan expressed feelings of unease towards Tanjiro due to the similarities between him and Yoriichi.[9]

Water Breathing (の, Mizu no kokyū?): Taught to him by Sakonji, the Water Hashira before Giyu. The Water Breathing combat style mimics the element of water, specifically the flow and flexibility of water, and infuses it with the users swordsmanship.

Hinokami Kagura (ヒノカミ, Hinokami Kagura?)Also known as the dance of the Fire God: Taught to him by his father. A breathing technique that increases the user's strength and endurance. The Sun Breathing combat style seemingly mimics the burning effect of sunlight on demons and replicates it with the users special swordsmanship and movements. The dance is composed of 12 segments repeated from sunset to sunrise. However, there is an unknown 13th form that is achieved if the segments are repeated one after another, as the techniques are meant to be connected like a circle from Dance to Flame Dance. When Tanjiro fully witnessed the Thirteenth Form performed by Yoriichi Tsugikuni and gained consciousness, he awakened the Hinokami Kagura into the legendary Sun Breathing (の, Hi no kokyū?) and used the Thirteenth Form against Muzan.[30]

Tanjiro is later transformed into a Demon by Muzan Kibutsuji as his last-ditch attempt at living on even after being killed by the Demon Slayer Corps; Muzan hoped to pass his feelings and abilities onto Tanjiro, deeming him capable to fulfil his legacy and become the true immortal King of Demons. Although Tanjiro is quickly reverted back into a human via Tamayo's humanizing drug, the power he demonstrates during this brief time as a Demon appear to be at least on par with those of an Upper Rank Demon, if not Muzan himself.

It was later stated by Yushiro that, in terms of biological potential, Tanjiro's potential to evolve as a Demon was a lot higher than his sister's, who was the first Demon to develop a resistance to sunlight, and even Muzan's, the first and Progenitor of all Demons.[47]

Retrieved from "https://kimetsu-no-yaiba.fandom.com/wiki/Tanjiro_Kamado?oldid=81009"
Community content is available under CC-BY-SA unless otherwise noted.