The Temple Demon (おの, Odō no Oni?) was the first Demon Tanjiro Kamado encountered that has taken a human's life.

The Temple Demon was a muscular Demon of average height. He had pale, ash-gray skin with two green marks around both of his upper arms and legs and shoulder-length, spiky dark-green hair parted at the middle of his forehead. He also possessed prominent fangs and sharp nails, attributes common to Demons.

The Temple Demon was seen wearing a sleeveless, blue tunic with a dark-turquoise-and-white pattern outlining his exposed chest. He wore pale colored bracelets around his wrists and ankles.

After getting his head kicked off by Nezuko Kamado, the Demon grew two muscular arms out of the sides of his head.[1] 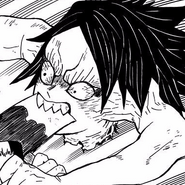 The Temple Demon after being decapitated by Nezuko.

The Temple Demon, like most Demons, was cruel and ruthless to humans, attacking Tanjiro Kamado without a moment's hesitation upon discovering he was human.[2] He appeared to be very defensive of his territory as he was irate about Tanjiro and Nezuko intruding onto his domain.[3] The Demon also displayed a sense of superiority over Tanjiro when the two fought, boasting his quick recovery after getting hit in the chin.[4]

The Demon had already been attacking travelers who take shelter at a small temple hut on the pathway that leads to Mount Sagiri. When Tanjiro was asking for directions, one of the villagers mentioned that it would be dangerous for him to travel at night as people had been going missing in the area.

Tanjiro and Nezuko pass by the temple that the Temple Demon is feeding in, and, smelling blood, the former rushes over and opens the door. He is shocked to find the Demon feeding on two dead men, and, annoyed, the Demon turns to the Kamado siblings and warns them about trespassing on his turf. The Demon turns to face them and, as the last light whithers away, he pounces on Tanjiro.[5]

Tanjiro quickly reacts by drawing his hatchet and slashes open the Demon's throat. The man-eating Demon stumbles back, but it only takes a few seconds before the "scratch" is fully healed. Nezuko meanwhile, is distracted by the bloodied victim's bodies.[6]

The Demon pins down Tanjiro before he has time to react. Tanjiro's enemy easily overpowers him in strength and speed. The Demon tries to snap the boy's neck but Nezuko comes to her senses and rushes back to her brother's side. She kicks the Demon's head clean off his body, freaking out Tanjiro.[7]

The Demon's body slowly tries to grab Tanjiro so Nezuko kicks it away into a tree. The Demon's head and body can move individually. The body attacks first, serving to isolate Nezuko. Tanjiro tries to help, but the Demon's head grows arms and he leaps onto Tanjiro's hatchet. The body kicks Nezuko several times before throwing her deep into the forest.[8]

Tanjiro headbutts the Demon with reckless abandonment and it proves effective. The Demon suffers two blows Tanjiro's rock hard head before getting thrown with the hatchet into a tree, pinning him there. Tanjiro tracks his sister to a cliffside where she's being kicked closer to the edge.[9]

Tanjiro tackles the Demon's body over the large cliff, but Nezuko grabs him before he falls too far. The Demon's body falls to its demise, and the head is knocked unconscious as a result.[10]

Tanjiro prepares a knife to finish off the Demon's head. He's struggling to come to terms with taking another life and believes this isn't the Demon who attacked his family. A man in a Tengu mask appears and tells Tanjiro he can't finish a Demon off using a simple knife.[11]

The masked man challenges Tanjiro to figure out another way. The boy believes crushing the Demon's head with a rock will suffice, but can't bring himself to brutally end the creature. The Demon awakens and curses Tanjiro until the sun rises and he disintegrates into ash.[12]