Kimetsu no Yaiba Wikia
Register
Don't have an account?
Sign In
Advertisement
in: Subpages, Characters, Male Characters,
and 2 more
English

View source
watch 01:33
Wiki Targeted (Entertainment)
Do you like this video?
Play Sound

Yoriichi Tsugikuni ( , Tsugikuni Yoriichi?) is a major supporting character of Demon Slayer: Kimetsu no Yaiba. He was a legendary Demon Slayer of the Demon Slayer Corps during the Sengoku Era.

Yoriichi is the younger twin brother of Michikatsu Tsugikuni, who later became a demon and joined the Twelve Kizuki, holding the position of Upper Rank One.

Like his twin brother, Yoriichi is a tall and muscular man with long and spiky hair with red tips that he kept in a ponytail. However, unlike him he was slightly more slender and had shorter bangs and wavier hair than his brother. His Demon Slayer Mark was at the same place at the top of his forehead as Tanjiro, albeit lighter in color. Yoriichi is always seen with a solemn and calm look on his face, rarely showing emotion.

Yoriichi wore a red haori over an orange nagagi with a black hakama and a Nichirin Blade carried at the left side of his waist, conventional to most Demon Slayers. He sported hanafuda earrings created by his mother as charms when he was thought to be deaf; he later gave them to his friend Sumiyoshi, who then passed the earrings down to his descendants and eventually Tanjiro as well. 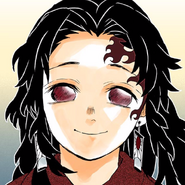 Yoriichi as a child. 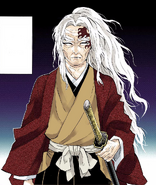 Yoriichi was a calm and respectful individual, wearing a solemn and reserved expression at all times, rarely showing outbreaks of emotion. Generally, Yoriichi had a matching low and serene disposition, evident when he killed demons without changing expression or when Muzan was caught off guard by his immense skill because he appeared unassuming. He was also extremely humble, seeing himself as just any other man and no one special despite his godly attributes; an example being the time he performed the Sun Breathing's forms for Suyako at her request and almost seemed embarrassed afterwards. Yoriichi was also noted by his brother to always have had faith in the future and was confident that despite the immense power of the Demon Slayers after they started using Breathing Styles, a generation would emerge that would surpass their own.

Despite being mostly nonchalant, he does experience strong emotions; he grieved the loss of Uta and their unborn child for ten straight days and was driven to tears seeing the joy Sumire showed at the simple act of being lifted up. He also smiled warmly and expressed gratitude to Sumiyoshi after his friend told him his life was not worthless and promised to preserve his Sun Breathing forms through his descendants. Yoriichi is also very kind, shown when he was on the way to fetch a midwife in the preparation of the birth of his child, he accompanied an old man he met along the way to see his fallen son.

As a child, it was shown that Yoriichi adored and idolized his older brother, Michikatsu, even declaring that he would support his brother's dream of becoming the strongest samurai in the land, and Yoriichi himself would become the second strongest. Even in his childhood, he was also extremely reserved and quiet, even being thought deaf by his family for seven years as he never spoke.

Yoriichi is shown to love his family greatly, particularly his older twin brother, evident when he kept the flute which reminded Yoriichi of his brother before he ran away from home, and kept it all the way till his death. When he met him after sixty years, the latter having embraced his new life as a demon. Yoriichi was deeply devastated and saddened by what his brother had become, expressing how heart-wrenching the sight of his brother was and even teared up. Still, he attempted to kill Michikatsu himself in order to stop him as a traitor of the Demon Slayer Corps.

Overall Abilities: Yoriichi is the strongest known Demon Slayer in the entire series and possibly the most powerful being that will ever exist, not only being born with the Demon Slayer Mark, Transparent World, Bright Red Nichirin Blade, Selfless State and knowledge of Breathing Styles but also a god-like physique and innate swordsmanship talent. As a child who has never picked up a sword before, he was able to defeat a trained sword instructor effortlessly[1] and he was referred to as a miraculous prodigy beyond compare. After training as a Demon Slayer, Yoriichi could defeat multiple demons to where his older brother stated that he as a child couldn't even compare to him as an adult.[2] He alone among the Demon Slayer Corps was able to corner Muzan Kibutsuji and overpowered him in an instant and had him on the verge of death until he managed to escape.[3] Despite having avoided death, Muzan was deeply scarred by that encounter, referring to him as a monster,[4] and even the sight of his earrings made him tremble in shock[5] and the mere memories of Yoriichi caused the bodies of other demons who have never met him to tremble.[6]

Shortly before his death of at least 85 years in age, he battled his older twin brother, Kokushibo who turned into a demon. Despite both his advanced age and apparent blindness, he quickly gained the upper-hand in the battle with a single move, slitting his throat before he finally died standing up, unscathed.[7] Kokushibo himself admits that if Yoriichi launched a second swing before dying, he would have killed him while commenting Yoriichi's power was still in his prime.[8][9]

Demon Slayer Mark: Yoriichi is the progenitor of the Demon Slayer Mark, being born with it, possessing the tremendous physical abilities granted by its effects all throughout his lifespan. Unlike all other marks users in his era, Yoriichi was able to defy fate and lived to about 85 years of age. It is presently unknown why Yoriichi is immune to the Mark's effects, but it's presumably because he was the first one ever to have it and born with it naturally, unlike all other mark bearers who must train to attain it.[10]

Extrasensory Perception: Outside of the sixth sense granted by the Transparent World which allowed him to see the inner workings of a person, Yoriichi also has extremely honed sensory abilities able to detect things outside the normal range of perception. Like most high-level Demon Slayers, Yoriichi would be able to discern the aura of demons from humans while also be able to tell the strength of his enemies at a glance. During Yoriichi's first encounter with Muzan, he could immediately tell that, by destiny, he was born into this world to defeat him.[15] Yoriichi was also able to accurately sense Demon King's aura, which he describes as magma erupting from a volcano.[16]

Genius Intellect: As a child prodigy, Yoriichi is extremely intelligent. Despite not speaking for most of his childhood, his first words were very clear and pronounced.[17] He also displayed maturity beyond his age as he noticed her mother's illness and helped her all the way till her death.[18] As another testament to his keen intellect, he could immediately use the Transparent World in combat despite never fighting before, being able to intuitively figure out that the lungs of person will expand before they attack and that he needed to watch their bone movement, muscle contraction and blood flow, which he used to his advantage instantly in the midst of battle.[14] Even with just the knowledge of how to hold a sword properly and go into a stance, he was able to instantly overpower a trained sword instructor, causing him to go unconscious and cause many injuries all over his body.[1] He was able to modify his Breathing Technique to suit the abilities of others by adapting them to their individual strengths. Furthermore, he was able to surmise that Muzan's weaknesses were his 12 organs and he could create an entirely new technique in that split second to overwhelm him.[19]

Immeasurable Speed & Reflexes: Yoriichi possessed unparalleled levels of speed that surpass all other characters in the series, including that of the Demon King, shown when he was able to dodge every attack that Muzan launched at him and near-fatally injure Muzan with one move, despite the demon's own immeasurable speed and strength.[20] . Even when Muzan divided himself into 1,800 flesh pieces to escape, Yoriichi still managed to reduce the number down to 300 in mere seconds.[21] Later, when Yoriichi was in his 80s he could blitz Kokushibo, Muzan's strongest subordinate, nearly severing his neck instantly, despite Yoriichi telling him when he will strike.[22] As another testament to his godlike movement speed, Yoriichi Type Zero, the robot doll modeled after him used by Demon Slayers to train, was built with 6 arms because 2 arms alone couldn't replicate Yoriichi's movements.[23]

Immeasurable Stamina & Endurance: Even as a child, Yoriichi could run for a whole day without rest, he even remarked he didn't feel the least bit enervated.[24] His vitality is also beyond peak-human level, being able to survive without food or water for 10 whole days when he was embracing his dead wife.[25] Moreover, Yoriichi lived to his 80s without his power waning in the slightest, as shown when he instantly outmatched Kokushibo during their final confrontation.[7]

Immeasurable Strength: Yoriichi possesses tremendous levels of physical strength possibly beyond that of nearly all other Demon Slayers in existence. As a child, he could knock out a grown man with inclined physical abilities with a wooden blade, even causing extremely severe bruises the size of fists.[26] When he was an adult, he was able to effortlessly slice off the neck of Muzan Kibutsuji, the most fortified body part of the strongest demon in existence.

Selfless State: During their confrontation, Muzan noted that Yoriichi emanated absolutely no sense of drive, hatred, anger, fighting spirit, animosity or even bloodlust despite being in mid-battle against him,[27] rendering it practically impossible for Muzan to detect him, predict his movements or gauge how powerful he was with his senses. This gave Yoriichi an edge in battle against Muzan as he underestimated his strength, a mistake that shook the Demon King to this day.

Unparalleled Swordsman: Yoriichi is the greatest swordsman in the series and of all time. Even as a child with no training, he was capable of easily defeating a trained swordsman the very first time he ever picked up a sword, striking him in multiple areas across his body faster than the eye can process.[1] His swordsmanship was so tremendous that a battle doll modelled after him had to be made with 6 arms wielding katanas and utilizing 108 techniques to even attempt to imitate Yoriichi's skills, and even then, the doll was still vastly inferior compared to him.[28] His swordsmanship easily overwhelmed the Demon King, Muzan Kibutsuji and he would have killed his twin brother, Kokushibo, the strongest swordsman in the current era, if he didn't die of old age.[9]

Sun Breathing (の, Hi no kokyū?): Created by Yoriichi himself as the original Breathing Style which all other subsequent styles would be modeled after and was later replicated by Sumiyoshi who called it Hinokami Kagura (ヒノカミ, Hinokami Kagura?). Yoriichi was incredibly proficient in his Sun Breathing, being able to take down demons effortlessly and even overwhelm the Demon King and strongest Upper Rank. Tanjiro remarked that when Yoriichi performed the techniques of Sun Breathing, the forms were so strikingly beautiful and breathtaking, he looked more like a spirit than a man.[29]

Standard Nichirin Katana: As a Demon Slayer, Yoriichi carries around a standard sized and shaped Nichirin katana that is deep black in color, but changes bright red during combat. His katana's hilt is circular shaped with 4 slight indentations, with a black center and a golden border. Yoriichi's katana also has the words Destroy (, Metsu?) engraved on the side. Along with his katana, Yoriichi also carries a standard sword sheath.